Look out, here comes the Master Race! Warning: language, because AUTHENTIC PEOPLE who have THE RAGE always swear. 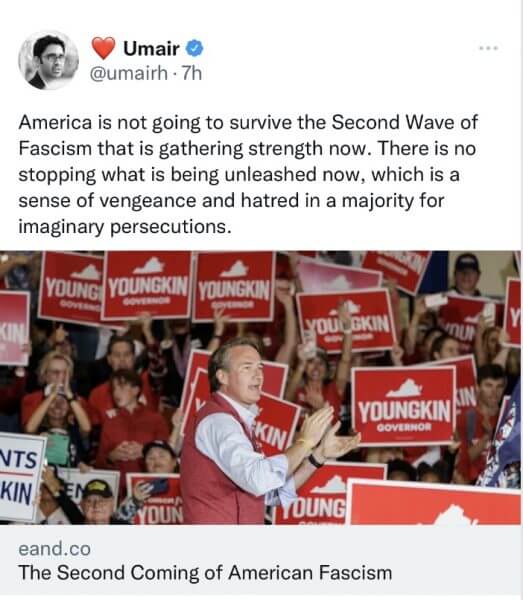 This fellow went on quite a tear about the Wisconsin case. While you can wave away most of the effervescent fulminations on Twitter, it’s always fun to see what the Verified Voices are saying.

So: second wave. I think he means a global Second Wave, which is lapping at the shores of every nation. Note that that ol’ goose stepper Youngkin is a standard-bearer for the new nightmare.

What seemed to be the big issue towards the end of the VA election? Education, and the rights of the parents vs. the ideology of the state. But since the statists were the good people – they just wanted to teach about history and racism and marginalized sexual identities! – the parents were fascists who wanted sanitized panegyrics to whiteness.

Progs: whiteness is a systemic evil!

Ordinary Americans, perplexed: that seems like a rather racist worldview.

Perhaps the “American Right” was focused on the self-defense issue, but sure: there were people who did not mourn “Jojo,” as actor Mark Ruffalo called the child rapist, and regarded the violent rioters as, well, violent rioters. This is the peculiar moral inversion of the era: it is meet and right to burn and destroy, but the people who object to the destruction are the shock-troops of fascism. It is noble to deface a building with a painted slogan; the very act of spraying graffiti is sanctified by the rightness of your cause. The only possible explanation for someone preventing you from defacing the building, or washing it off later, is because they disagree with you, and if they do, then voila: they are fascists. It’s really that simple.

A reminder: if Rittenhouse had been killed that night, no one would remember his name. The trial of his killer would not have been national news. (Like Gosnell, a “local story.”) Killing him would have been necessary, Because Fascism.

Why, perhaps it still is. 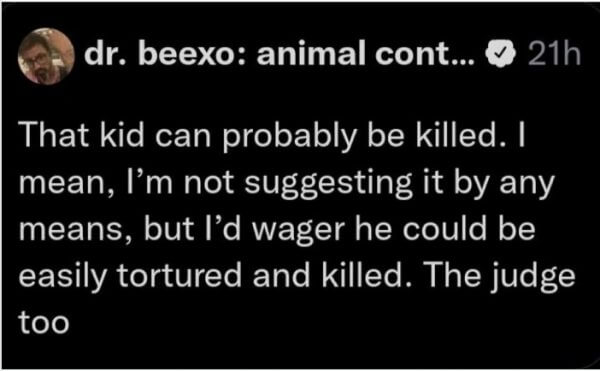 Another verified genius weighs in, with a reminder.

Should this happen, it will not be a sign that street violence is a terrible thing to countenance, and leads to hideous ends; it’s a sign that the horrible system under which we labor produces injustices that produce lamentable, but understandable, reactions. I mean, if you don’t want judges shot down in the streets, elect better judges, y’know? 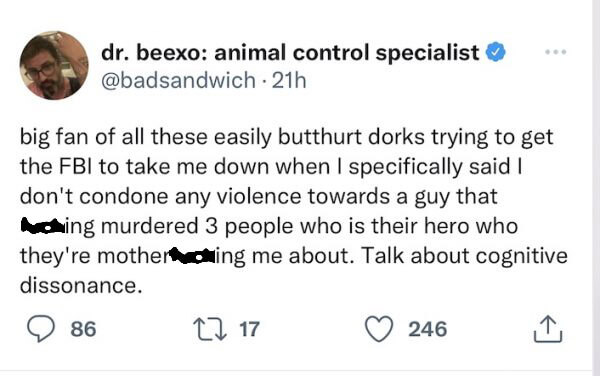 Oh by the way he didn’t mean it like that you idiots.

One might say that the summer of 2020, with its impotent reactions to criminal destruction of American cities, might, in some tortured sense, be defined as “anarchy.” The left’s defense of destruction For Great Justice, and waving away of the plight of the “victims” might also be construed as a “validation” of “mayhem.”

I mean, it’s not an unreasonable idea, is it?

It is? Sorry. I guess that’s the sort of blinkered foolishness you’d expect from someone who is not making plans to flee: 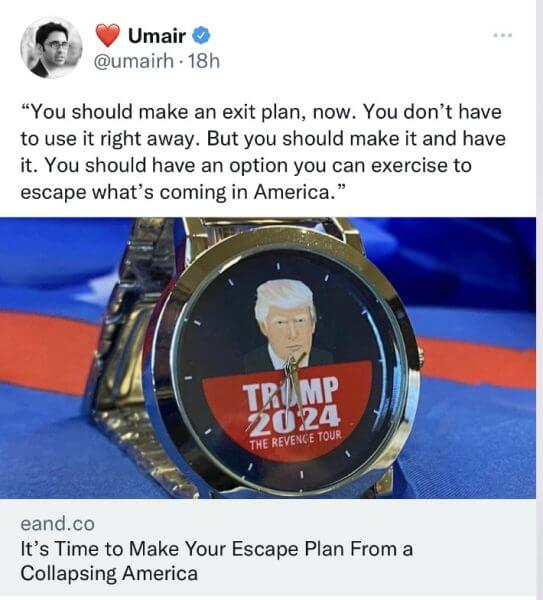 The left is completely powerless to prevent this, it seems. They have no power. The government, the educational establishment, the media: all weak as Parvo-stricken puppies, unable to muster anything more than a feeble bleat of disapproval. Soon the streets will fill with angry men who want to break store windows and set cars on fire.

No no not those guys, they’re good! We mean the bad ones.

There will be mobs who attack Jews. No no not those guys, they’re angry about colonialism or acting out whiteness doctrines of otherizing, please keep up.

What? No, no, that’s different. Please, you’re not conversant in the prismatic subtleties of the intersectional matrix, so maybe sit this one out? Once you’ve done the work, then perhaps you will be alert to the neo-Fascist elements who will restructure society to otherize those who do not have pure blood –

What? No, no, that’s different. That’s a matter of public health. Of course, you should have to show your papers. Point is, America is a lost cause. Soon, very soon, a group of people will try to burn down a city because they saw some tweets about a thing, and there will be a horrifying moment when the authorities prevent it. The nascent subterranean Fascist instinct ignites in the citizens, and they will join the police to prevent the people from smashing the store windows and burning down the legislature building.

When the morning rises and the streets are not twinkling with broken glass – Kristall-not!  –  and the legislature is not a smoldering heap – well, then you’ll know.  The Second Wave of Fascism has crashed on the shores of America, and engulfed us all.