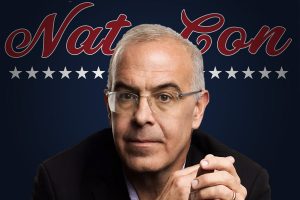 New York Times columnist David Brooks is terrified. This time, it’s not due to a shabby Bordeaux or a deli owner using “who” instead of “whom,” but from the National Conservatism Conference held in Orlando two weeks ago.

Called NatCon for short, the conference “brings together public figures, journalists, scholars, and students who understand that the past and future of conservatism are inextricably tied to the idea of the nation, to the principle of national independence, and to the revival of the unique national traditions that alone have the power to bind a people together and bring about their flourishing.” Speakers included Sens. Cruz, Hawley, and Rubio; radical bomb-throwers like Glenn Loury, Rich Lowry, and Batya Ungar-Sargon; and others committed to the cause, such as Peter Thiel, Christopher Rufo, and Rod Dreher.

I’m terrified just typing those names! (If I didn’t have my inhaler near, I couldn’t keep writing.) Anyway, when Brooks attended NatCon, he “had a sinking sensation” about the “apocalyptic,” “disconcerting,” “alarming” event and what it presaged for conservative youth. (You should have heard what he said about the Bordeaux.)

Brooks’s 3,000-word jeremiad includes plenty of quotes from the conference to justify his horror. Here’s a sampling:

“[The left-wing elite] is a totalitarian cult of billionaires and bureaucrats, of privilege perpetuated by bullying, empowered by the most sophisticated surveillance and communications technologies in history, and limited only by the scruples of people who arrest rape victims’ fathers, declare math to be white supremacist, finance ethnic cleansing in western China, and who partied, a mile high, on Jeffrey Epstein’s Lolita Express.” — Rachel Bovard

“Big Business is not our ally. They are eager culture warriors who use the language of wokeness to cover free-market capitalism.” — Sen. Marco Rubio

“Our Americanness is much more important than our Blackness. We must strive to transcend racial particularism and stress universality and commonality as Americans.” — Glenn Loury

Good thing I have a second inhaler handy.

Going through the ample quotes provided, I couldn’t find much I disagreed with, let alone was terrified by. Brooks spends a good 500 words mocking the hypocrisy of people like Sen. Cruz who attended elite universities yet have the audacity to critique their Ivy League tribe. This smacks of “class traitor” rhetoric, which is foolish on its face.

But his primary worry is that, after several decades in a defensive crouch, conservatives finally want to fight back in the culture war.

The first great project of the national conservatives is to man the barricades in the culture war. These people have certainly done their homework when it comes to cultural Marxism—how the left has learned to dominate culture and how the right now needs to copy their techniques. If I’d had to drink a shot every time some speaker cited Herbert Marcuse or Antonio Gramsci, I’d be dead of alcohol poisoning.

Conservatives have lately become expert culture warriors—the whole Tucker Carlson schtick. This schtick demands that you ignore the actual suffering of the world—the transgender kid alone in some suburban high school, the anxiety of a guy who can’t afford health care for his brother, the struggle of a Black man trying to be seen and recognized as a full human being. It’s a cynical game that treats all of life as a play for ratings, a battle for clicks, and this demands constant outrage, white-identity signaling, and the kind of absurd generalizations that Rachel Bovard used to get that room so excited.

Conservatives have got the culture-war act down. Trump was a culture-war president with almost no policy arm attached. The question conservatives at the conference were asking was how to move beyond owning the libs to effecting actual change.

Apparently, Brooks doesn’t think about the young girl raped by the “transgender kid” in some suburban high school, the anxiety of a guy fired from his job for not getting the second Pfizer shot, or the struggle of Glenn Loury trying to be seen and recognized as something more than a racial category. He’s quick to criticize the trickle of “apocalyptic” rhetoric in Orlando while ignoring the firehose flowing out of Manhattan.

Brooks seems to think conservatives are launching a culture war of their own rather than responding to one the Left began in the late 1960s. While we have made minor advances here and there (gun rights, school choice), you can’t compare American society in the ’80s to today and think we’ve won most cultural battles. It’s long past time for the right to engage in the culture war; the only thing that’s “terrifying” is pretending no war exists.

While Conservatism holds to unchanging ideals, its tactics constantly change. Calvin Coolidge was a great president, as was Ronald Reagan 50 years later. Both employed different tactics suited to their age. Fifty years after Reagan, I’m thankful young conservatives want to update their tactics for the current era.