After a humungous win in taking an entire state that had been blue for 12 years, Kevin McCarthy could not use the momentum to keep his caucus away from a toxic Congress and President that had been thoroughly rejected merely 72 hours ago. The writing on the wall was clear from voters as are all the various national polls. They want nothing to do with the Biden and Pelosi agenda. The Democrats have the majority for another year. Let them live or die on what they can come to agreement on amongst themselves. The Democrats promised a plan for the virus, infrastructure, paid family leave, amnesty, climate legislation, and free healthcare for illegals when they ran. They ended up in a civil war between their woke progressive caucus and establishment Democrats who wanted to take what they could get. Under McCarthy’s leadership, they got saved.

This is not just about McCarthy being unable to whip his caucus together to ride a clear message sent from voters against having anything to do with this governing agenda. McCarthy like so much of the frauds who run the GOP is a prime part of the problem. When McCarthy is not busy having a sleepover with Frank Luntz so they can get together into the wee hours of the morning, make s’mores, and craft a losing message, he is recruiting people like this. 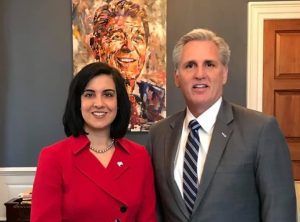 This is Nicole Malliotakis. She represents an R+11 district in Brooklyn/Staten Island. She is one of McCarthy’s favorite freshmen. She is the daughter of immigrants. She is part Latina. And, forgive me for presuming her gender, she is female. She checks all the social justice warrior boxes the GOP loves to take advantage of because they think Progressives will one day go ‘oh wow, I guess you guys aren’t so bad after all!’ Well, this recruit of McCarthy’s sided with Pelosi to pass this dung heap.

This is who gets the fast track from corrupt GOP leadership. This is who stabs you in the back merely 72 hours after you put your money, blood, sweat, and tears into helping the GOP flip a state. And this recruit should be hung on Kevin McCarthy’s neck. Not being able to wrangle your caucus into not giving this collapsing president and the odious witch Nancy Pelosi a lifeline a mere 72 hours after a massive rebuke of them should make the conversation on making this inept joke speaker a no go. McCarthy actively recruiting and developing people who made it happen should lose him his seat.

And let me tell you about the betrayal of this bill. It is not only that the GOP under the leadership of McCarthy gave this president and speaker a win in which to run against us on next November. That is bad enough. Let us not forget that when Trump was president and we had a majority in both houses, he wanted $25 billion to increase worker wages. He also wanted a wall. Republicans did very little to get these popular programs through and fight for that president even when he had a mandate and all three branches. Instead, they passed corporate tax cuts for woke corporations. As a minority, they made sure to get Biden and Pelosi their $1.2 trillion crapfest on the heels of a massive defeat, thus saving them and their party. And that is not even the worst betrayal still.

This bill gives money to cities that abolish single-family zoning. The Republicans talk about family values and they just passed a bill that attacks families in American cities. They just betrayed their constituents. As if the family was not being attacked enough with critical race theory being fed to their kids in school, degenerate culture being pumped into their homes, their jobs being shipped to China, gas prices rising, inflation, supply line shortages, and the rest. The GOP spits in the face of their constituents by rewarding cities that will create woke zoning laws and destroy single families in their jurisdiction.

We are supposed to fight for the average American. The worker. The family. Children. This bill attacks all of them and the GOP gave its imprimatur to it so the Democrats can run around saying it is bipartisan as a talking point when its negative effects are assailed by conservatives and Republicans, but not when they are claiming Biden and Pelosi got it done singlehandedly and are running against the GOP.

Please continue your chants against Joe Biden. However, do not forget it is also important to chant against Kevin McCarthy and the GOP.