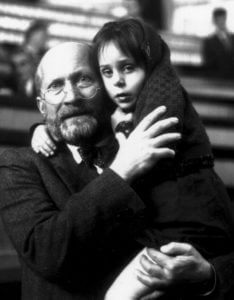 Stories of heroes during the Holocaust are abundant, but every now and then a particular story catches my eye and grabs my heart, especially if it connects to current events. The story of Janusz Korczak is one of those stories.

Janusz Korczak was born into an assimilated Jewish family in Poland in 1878. He became a writer, then a pediatrician, and even served as a doctor in the military in the Russo-Japanese war. Eventually, he realized that his true passion rested with education, and in 1911 he founded an orphanage in Warsaw, Poland, called Dom Sierot.

He loved teaching and empowering children, too:

During his work with the orphanage, Korczak helped the children to make their own newspaper (editing this before publication), which became part of the Nasz Przeglad, a popular Polish-Jewish newspaper at the time. This newspaper was called the Maly Przeglad (or ‘The Little Review’).

When World War II erupted, Korczak wanted to volunteer for the Polish Army, but he was too old, so he kept his orphanage open. The number of children grew as the war progressed. Then his charges were forced into the Warsaw ghetto:

Despite his poor health conditions, Korczak put all his energy into bettering the lives of his children from within the Warsaw Ghetto. He was offered shelter many times, by such aid groups as Zegota (the underground Polish resistance group, dedicated to helping Jewish people throughout the war in Poland during German occupancy). Every time Korczak was offered shelter, he would refuse it, saying that he could not abandon his children.

Still, Korczak did his best to maintain his goals with his children:

The educator would continue to organize plays and concerts with the children that attracted all sorts of people from within the surrounding area.

In addition to this, every Saturday after the director of Dom Sierot and his members of staff had their weekly educator’s meeting, Korczak would tell a story that the children had chosen for him to read. Korczak tried his very best to keep the children educated throughout their time in the ghetto, striving to instill within the orphans the values of honesty and truth in these trying times.

He never abandoned his children. In August of 1942, Korczak, his Deputy Director Stefania Wilcznska, and 12 of his staff, along with 200 children were transported to Treblinka where they died in the gas chambers.

Today’s children have been, and continue to be, victimized by the education system. Their tribulations are not on the scale of children in the Holocaust. But I couldn’t help but be touched and impressed by the dedication of Janusz Korczak to his children. Their education was paramount for him; he devoted his time to stimulating their curiosity and their creativity. Even in the worst of circumstances, he chose to enrich their lives; even when his own life was in danger, he stayed with them, courageous to the end.

When I look at our own education system in which our children are immersed, I mourn our losses. Instead of inspiring creativity, our children are brainwashed by their teachers. Instead of instilling traditional values, including love and compassion, they are taught propaganda and inhumane values. Unlike Korczak who refused to abandon his children at the risk of losing his life, our own children have been abandoned by their teachers and the system. Those teachers couldn’t begin to understand Korczak’s selfless dedication:

Korczak wrote an apt note in his diary, later published as Ghetto Diary, reflecting on his life; it stated that ‘My life has been difficult but interesting. In my younger days I asked God for precisely that.’

We can thank G-d for men like Janusz Korczak.