A few years ago, and I can’t remember the occasion, long having deleted my personal Twitter account, I suggested on that social medium that he was less than fair in his analysis of a particular political campaign. I mentioned that he once worked for Virginia’s (then) most liberal governor, Democrat Henry Howell (who was right about Dominion Energy, by the way).

He took great umbrage, and we would civilize things by basically agreeing to disagree.

My, how things change.

Sabato, 69, established and still directs the Center for Politics at the Univerisity of Virginia, the Commonwealth’s leading publicly-funded university and a nationally-ranked school. Both UVA and Sabato’s Center for Politics is a rousing success, by any standards. Except that since Donald Trump’s election, Sabato has exhibited all the advanced stages of not only Trump Derangement Syndrome but wokeness. Proof: 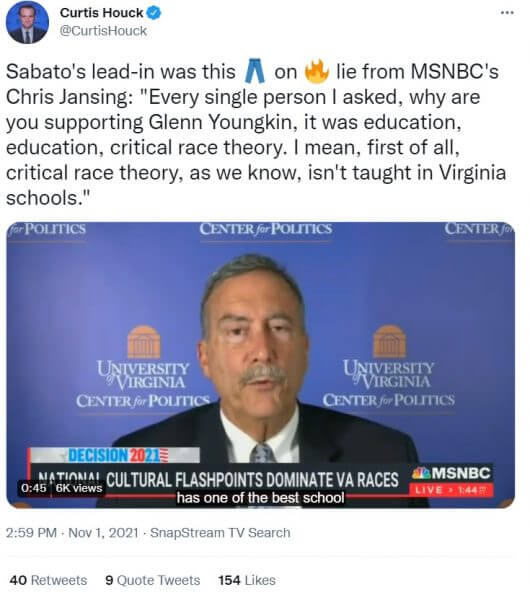 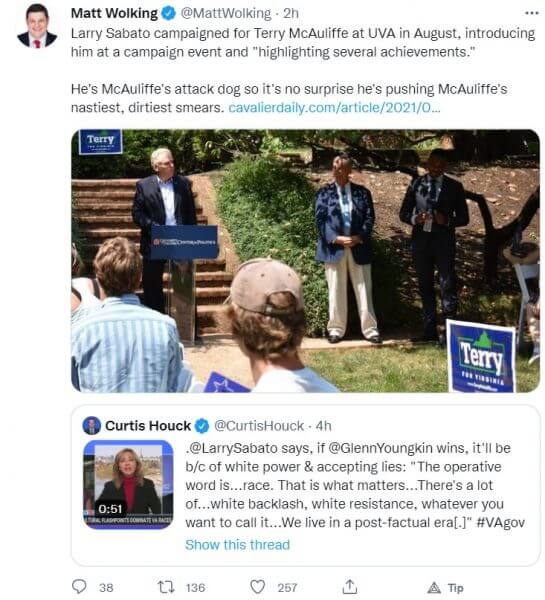 I am personally delighted that neither of my children studied under Sabato. Their schools (Bucknell, Elon) have their issues, but nothing like this. And nothing I say detrimental of Sabato should reflect on the otherwise excellent team assembled at the Center for Politics, including Kyle Kondick, who by all measures lives up to Sabato’s original mission.

The question for me is, why is the deeply partisan and highly woke Larry Sabato still officially connected to the very public and supposedly non-partisan University of Virginia?

I can’t find any policies on the internet regarding the regulation of partisan political activities of professors and employees at the University of Virginia. And while state employees should, of course, be allowed to express their political viewpoints personally and support the candidates of their choice, they should NOT be allowed to use public resources or their affiliation with the University of Virginia to express views in support of or opposition to, or to characterize supporters of candidates in a derogatory way. You know, like suggesting they are racist crackers.

If Larry Sabato had integrity, he would resign. Since his massive ego doesn’t allow him, he should be fired. Perhaps future Governor Glenn Youngkin will appoint UVA regents who will arrange that. It is long overdue.