So there I was this morning, slurping up my daily “Jolt of Good News” from the Good News Network when I came across this tidbit and was catapulted (you’ll see what I did there in a moment) back several years in my Ricochet life.

Normally, I only get this sort of “pointless nostalgic” about the site on Dec. 10, of which the one this year will mark my 11th Ricoversary. But I’m getting older by the minute, and perhaps my threshold is lower than it used to be. In any event, on seeing a story about the residents of Istanbul improving the lives of thousands of stray cats with elaborate outdoor cat houses, I thought about my friend Claire.

She was one of the reasons to join Ricochet, back there at the dawn of the second decade of the 21st century. She was (and her profile indicates that she still is) an editor here. You haven’t lived until one of your posts has been edited by Claire, trust me. What emerges at the other end is often nearly unrecognizable, but generally, better. (Insert quibbles here; Lord knows, there are some.) Her own posts were erudite, informed, interesting, and about so much more than politics. Until, somehow, one day they weren’t. And things began to go sideways from there.

I’ll never be other than sorry about that, because I don’t believe that political differences, no matter how stark or how ugly, should be our sole identifier, and the sole enabler and arbiter of friendship. In my world, you stick up for your friends and for those who’ve done you no wrong — publicly, privately, and everything in between, even if you don’t always agree with them, or even if you find some of the positions they take on some things distasteful.

Because they’re your friends. Or at least they’re not hostiles.

By and large, that’s true on Ricochet. We stick up for each other. Even for those of us who espouse beliefs we loathe. When they’re ill or in trouble, we support them, and the reverse is also true (I know this from personal experience). When they need help, we’re there. And when we need help, they show up for us. I wish only that all of us, from top to bottom, understood this. But I’m afraid some don’t, and that some are afraid, no matter (or perhaps because of) their status here, to weigh in on matters humane and universal. I hope and pray that changes.

Lord knows, there’s even room here for a prodigal son or two. I expect you know who you are, and I’m happy to welcome you back as well.

I remember the morning I woke up — groggily — to hear my iPhone  making a call and discovered that one of my cats (Fat Alice, of course) had — somehow — managed to knead my iPhone into submission with her paws, had got into Slack, and had dialed Claire’s phone number in Paris and was eagerly awaiting her picking up the phone, probably so she could complain about her treatment out here in Rural ‘Murica, and ask (nicely) for Claire to buy her a plane ticket to the City of Love.

The stories (not all happy ones) about a Ricochet member who babysat Claire’s Parisian cats for a while. Because that’s what we do. And what I might have done, had my own personal situation not been so fraught at the time.

Why I Love Turkey: “A few hours ago I got up to feed my cats. When I put out the food, to my puzzlement, only six cats showed up … ”

Catstantinople: “I think the world needs cheering up. I think it’s time to end the mystery and answer the question: How exactly did I wind up in Istanbul with seven cats … ”

Hallowe’en in Istanbul [Seasonally relevant, as well!]: “I want to indulge Peter, but I can’t rightly recall seeing a carved pumpkin in Istanbul. This is what they do to pumpkins, though: It’s called kabak tatlısı, and it’s delicious … ”

This Post Represents One of the Greatest Achievements in Human History: “Over the past 48 hours, I have moved my entire household — including seven cats and two turtles — from one neighborhood of Istanbul to another … ”

And then there are the posts (like mine today) in which mention of Turkish cats conjures up in the minds of others, like Turkish delight, thoughts of Claire, of which the following is only a small sample:

Catapalooza, or “Dr. Berlinski, please call home; your cats need to hear from you. Now.”: “Could this be the real reason Claire went to Istanbul (and why her cats wish she was still there) … ”

What’s That, Claire? A Ricochet Meetup In The Park: I’m terribly sorry but, I’m uh, … I have to lick my fur that day … ”

Some of those posts written by members no longer here whom I knew, had met, and still miss. O tempora! O mores!

But, here we still are. And life goes on, not always as we will it, but always as it does.

Much as I enjoy the political fray both here and elsewhere (and I do enjoy it, although I don’t always strenuously engage), I’m really here for the community and the connection.

May it ever be so. And, in the spirit of which — I’m thinking — what we really need in this country is a project to “improve the lives of thousands of abandoned roosters with elaborate chicken coops.” Been there. Done that. Herewith, a couple of shots of my first effort in this regard. Isn’t it a beauty? 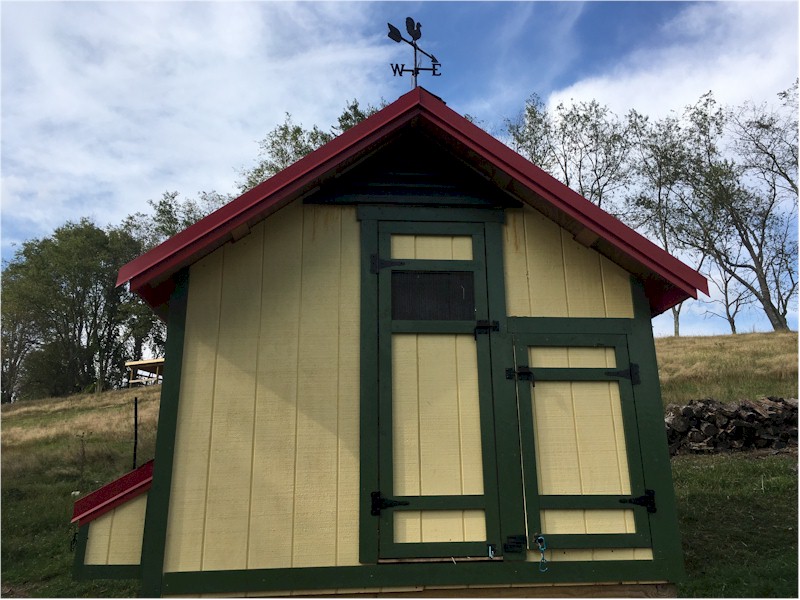 Here’s to Claire, and to everything and everyone who brought us here, and whoever and whatever keeps us here. I’m not bailing. Ricochet will have to sweep me out the door just before they turn out the lights. (Hope that doesn’t happen, BTW: neither the lights nor the sweeping. Just staking out my ground. And. Not. Budging.)