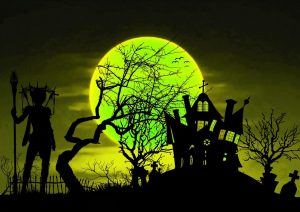 He served in the British Navy during World War II. Before the war, William Golding was a humanist, assured that people are perfectible, that humans can bring into being some future utopia. In Golding’s words, “All you had to do was to remove certain inequities and provide practical sociological solutions, and man would have a perfect paradise on earth.” After the war, Golding wrote a novel, the theme of which was about what he called “the defects of human nature.”

William Golding’s novel Lord of the Flies tells the story of military schoolboys left to themselves on a desert island after a nuclear holocaust. Apart from any adult supervision, the boys devolve into a state of savagery, falling from modern to primitive. Split into two groups the boys vie for power. One group, fighting an island beast, erects a pig’s head on a pole which is soon surrounded by flies. The title of the novel, Lord of the Flies, reveals the true nature of the beast – the monster is not the pig but the boys themselves.

Monster costumes around Halloween are related to Lord of the Flies. The word “insect” comes from the original word for “bug,” later, boogeyman. Movie titles with the words “ghost,” “specter,” “goblin,” or “scarecrow” come from a fear of some beast, some Lord of the Flies. But as Golding and his novel teach us, the real monster, the real beast, is us. We may be haunted by supernatural entities – which do indeed, exist – but our first problem is the problem of our nature. Just like the boys on the island, left to ourselves, we will always be the monster. So, dressing up for Halloween as our favorite monster might be easiest if we just go as ourselves.

For Truth in Two, this is Dr. Mark Eckel, president of the Comenius Institute, who believes everyone should read Lord of the Flies.