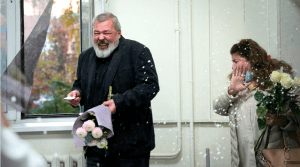 As international recognition of Russia goes, this hasn’t been a fun week for Vladimir Putin. News that the Kremlin had decided to reimpose lockdowns and the President’s own admission that the country could be hurt by a gas crisis was overshadowed only by two things: Dmirty Muratov winning the Nobel Peace Prize and Alexei Navalny being awarded the Sakharov Prize. Neither man is a friend of the regime, to say the least, and winning such prominent awards bolsters Muratov’s international profile, keeps Navalny on Western minds, and gives much-needed succor to the pro-democracy opposition movement in the country.

Anyone that follows Russia will be familiar with Navalny, but I think it’s worth doing something of a deep (or at least not quite shallow) dive on Muratov, as he represents a branch of the opposition less recognized than political and movement leaders outside of the country.

Essential to understanding Muratov is understanding the outfit he works for, Новая газета/Novaya Gazeta, lit. New Gazette. Founded in part with the monetary prize from Mikhail Gorbachev’s 1990 Nobel Prize win, the newspaper put out its first edition on the 1st of April, 1993. Many of the journalists were drawn from Komsomolskaya Pravda (one of the official news arms of the Komsomol, the youth wing of the Soviet Communist Party, which is now a tabloid), and were excited for the opportunity to do uncensored journalism for a non-state entity. The newspaper did everything but endear itself to Vladimir Putin from the start; in 2001, it became embroiled in a fierce legal battle for accusing a member of his inner circle, Sergei Pugachev, of corruption. Although the organization he represented was eventually forced to withdraw its claim for compensation because the extent of the corruption was revealed, by materials the organization’s own lawsuit, to be much worse than previously thought, the pattern repeated itself.

Of all of the journalistic outfits in Russia, Novaya Gazeta is also a leader in early mortality. Seven of their prominent contributors, including Anna Politkovskaya and Igor Domnikov, have been murdered, most by suspected agents of the regime and/or at its behest. Their families and friends have seen little in the way of justice.

Muratov, already a promising young journalist of 32 in 1993, was one of the founders of the newspaper, and worked through years without salary, shortages of resources, and limited staffing to bring it to a place of prominence. After covering the First Chechen War, he became head of the editorial board in 1995. It was only after 22 years that he stepped down from this position, citing exhaustion from the intensive nature of balancing the business and editorial demands of the paper, and dealing with day-to-day safety concerns for the people under his care. He promised not to run for re-election, but in 2019 his colleagues voted to reinstall him in his post against his wishes. Despite his objections, he did resume the post, and has been at the head of the newspaper ever since. 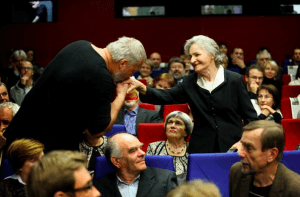 One of the most internationally decorated men in Russian journalism, Muratov still never expected to receive a Nobel. In his own telling to the Associated Press:

At the time Friday, Muratov was absorbed in an argument on the phone with a reporter, Elena Milashina.

“At that time, there were several calls from Oslo. But only a reckless person would say to Milashina ’Wait, I’ll talk to Oslo and then you and I will quarrel,” Muratov said on Ekho Moskvy radio.

Finally, he was told by his paper’s spokeswoman that he had won the 2021 Nobel Peace Prize, along with journalist Maria Ressa of the Philippines, for their fight for freedom of expression in countries where reporters have faced persistent attacks, harassment and even murder.

On damage control, the Kremlin’s spokesman, Dmitry Peskov, said, “”We can congratulate Dmitry Muratov. He persistently works in accordance with his own ideals, he is devoted to them, he is talented, he is brave.”

Muratov was not particularly impressed when a radio host asked him to comment on Peskov’s statement. Replying that he hadn’t heard it, he enquired halfway through the host’s reading “Should I rise?”, and said simply that the Putin’s ally’s words were “true.” Yet another Dmitry, Putin’s “mouthpiece”, the popular presenter and Russia Today head Kiselyov, expressed a sentiment much closer to the regime’s actual feelings when he declared that, “The Nobel Peace Prize is one of the most controversial nominations of the Nobel Committee. Such decisions devalue the prize itself, it is already difficult to be guided by it.” 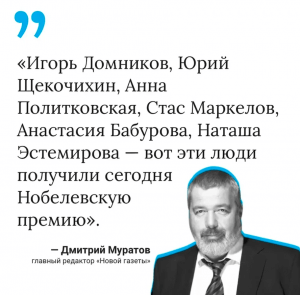 However, Muratov hasn’t been particularly praiseful of himself either, albeit for (obviously) different reasons. “I can tell you directly that if I were on the Nobel committee, I would have voted for him [Navalny] for his absolutely crazy courage,” he told journalists who enquired about the debate in some quarters of the Russian opposition about who deserved the prize. For him, the prize is not a recognition of his individual merit or excellence, but of the courageous work of Novaya Gazeta, and especially of the journalists who have lost their lives working for it, in pursuit of the truth.

As for the money which comes with the prize?

It will be donated to a health foundation that helps journalists; to a foundation that supports children with spinal muscular atrophy and other serious rare diseases; a part will go to the Anna Politkovskaya Prize Foundation; and, of course, a part will go to the children’s hospice in Moscow, the Vera Foundation and the Dmitry Rogachev Clinic, where children with leukemia are treated. That’s it!

Gorbachev’s initial gift, it seems, has given back tenfold. And will continue to do so.