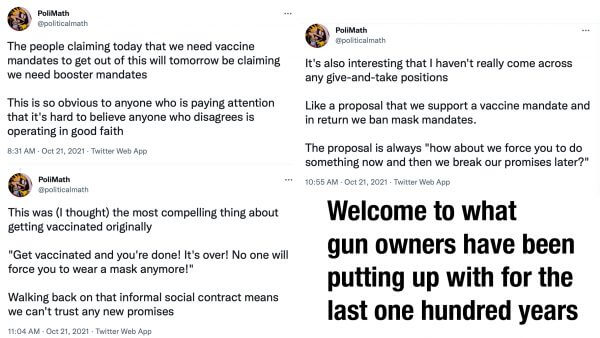 Polimath (and others) are feeling the same oppressive weight of the government boot on their necks that America’s gun owners have been feeling ever since the introduction of the Sullivan Act.

“Just give up a little bit of your rights, and you’ll make the rest of us feel safer” has been the motto of the gun control movement since day one. Now that same logic, (if you want to equate emotion of feeling safe as logic) is being applied to public health as a whole, and people aren’t liking what they’re hearing.

Stephen Kruiser once said that firearms are the gateway drug to freedom. In this case, however, firearms ownership is the canary in the coal mine. What big government and runaway political corruption have been doing to our freedoms under the Second Amendment, they’re now doing to every other civil right as well.

Welcome to the party, everyone. Don’t say we never tried to warn you.