So here’s something that might interest you on a weekend afternoon: Long time Ricochet member Eric Cook joined me to talk about silent cinema–about the beginning of American cinema, of cinema in general–the first great or at least very impressive movie. It’s a story of the Civil War, since people used to know, that’s the definitive American story! It was made in 1915 and it lasts three hours, it involves everything from portraits to long shots of battles, and pioneered or perfected every technique from playing with shadows and lighting to editing. As Chaplin says, D.W. Griffith was the father of all artists in cinema. It’s also a shockingly racist movie–the more so when you think about the Progressive pacifist politics of the director and of the movie. But in certain ways we will try to explain, all the successes and failures make sense together–the promise and disappointments of Hollywood can already be glimpsed. Eric is an expert on silent cinema, is involved in music for silent cinema, scoring, conducting, and playing, and has studied Griffith with great care, so you are in for a delight! Listen, my friends, and get to know Griffith, or look at him with fresh eyes! 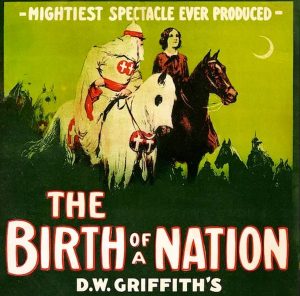