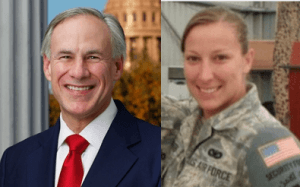 Newsmax is good at clickbait headlines and videos but falls far short in real reporting on the apparent Air Force refusal to support military burial honors for Ashli Babbitt, an honorably discharged Air Force veteran. The Newsmax story just features the angry, grieving mother and one attempt to call one military office before publication. There is not even a minimal effort to check the basic policy and law behind death benefits and military honors for veterans. Newsmax baits, I dig for your consideration, and leave you with a provocative possibility.

There are two pieces to the federal government honoring a veteran in death. The first piece is burial benefits, including burial in certain cemeteries, grave markers, and a folded flag. These are the statutory responsibility of the U.S. Department of Veterans’ Affairs (the VA). The second piece is a military honor detail at the internment, what used to be called a burial detail. This is a statutory duty of the Department of Defense. Each service has a duty to its own, fulfilled by active duty, and drilling Guard and Reserve service members. The statutory minimum is two service members in the military honors detail.

The general rule is that veterans who were separated from service under honorable or general conditions are entitled to certain VA burial benefits and military honors. Not surprisingly, then, the relevant law shows up in both Title 10 (Armed Forces) and Title 38 (Veterans’ Benefits). Here are the relevant bits, with emphasis added:

(a)Prohibition of Performance of Military Honors.—The Secretary of a military department and the Secretary of Homeland Security, with respect to the Coast Guard when it is not operating as a service in the Navy, may not provide military honors (under section 1491 of this title or any other authority) at the funeral or burial of any of the following persons:

(1)A person described in section 2411(b) of title 38.
(2)A person who is a veteran (as defined in section 1491(h) of this title) or who died while on active duty or a member of a reserve component, when the circumstances surrounding the person’s death or other circumstances as specified by the Secretary of Defense are such that to provide military honors at the funeral or burial of the person would bring discredit upon the person’s service (or former service).

(b)Disqualification From Burial in Military Cemeteries.—Except as provided in subsection (c), a person who is ineligible for interment in a national cemetery under the control of the National Cemetery Administration by reason of section 2411(b) of title 38 is not entitled to or eligible for, and may not be provided, burial in—

(c)Unclaimed Remains of Military Prisoners.—Subsection (b) shall not preclude the burial at the United States Disciplinary Barracks Cemetery at Fort Leavenworth, Kansas, of a military prisoner, including a military prisoner who is a person described in section 2411(b) of title 38, who dies while in custody of a military department and whose remains are not claimed by the person authorized to direct disposition of the remains or by other persons legally authorized to dispose of the remains.

So, we seem to have two basic situations under which a veteran must be denied military honors at a funeral or internment ceremony. The first is defined in another statute, in Title 38. It turns out that Congress reacted to concerns about perpetrators of certain notorious crimes being honored, let alone buried with our honored departed veterans.

(1)In the case of a person described in subsection (b), the appropriate Federal official may not—

(2)In the case of a person described in subsection (b)(1), (b)(2), or (b)(4), the prohibition under paragraph (1) shall not apply unless written notice of a conviction referred to in subsection (b)(1), (b)(2), or (b)(4), as the case may be, is received by the appropriate Federal official before the interment or memorialization of such person. Such written notice shall be furnished to such official by the Attorney General, in the case of a Federal crime, or by an appropriate State official, in the case of a State crime.

(b)A person referred to in subsection (a) is any of the following:

(A)is found (as provided in subsection (c)) to have committed a Federal capital crime or a State capital crime, but
(B)has not been convicted of such crime by reason of such person not being available for trial due to death or flight to avoid prosecution.

(A)who has been convicted of a Federal or State crime causing the person to be a tier III sex offender for purposes of the Sex Offender Registration and Notification Act (42 U.S.C. 16901 et seq.); [1]
(B)who, for such crime, is sentenced to a minimum of life imprisonment; and
(C)whose conviction is final (other than a person whose sentence was commuted by the President or Governor of a State, as the case may be).

So, this is not about crimes in general, even felonies in general. Congress was legislating very narrowly here, barring the worst of the worst, capital crime convicts, not people claimed to have committed crimes at the Capital. The most monstrous sex offenders, not deplorable political offenders. That takes care of 10 U.S. Code § 985 (a) (1).

So, we are left with 10 U.S. Code § 985 (a) (2). Having covered themselves in the case of two especially notorious sets of criminal offenders, Congress decided to avoid direct responsibility for other unforeseen situations that would draw the same level of public ire. So, they delegated to the service secretaries and the Secretary of Defense.

Look at how the law reads:

. . . when the circumstances surrounding the person’s death or other circumstances as specified by the Secretary of Defense are such that to provide military honors at the funeral or burial of the person would bring discredit upon the person’s service (or former service).

So, the Congress apparently delegated to the Secretary of the Air Force the responsibility to determine if the circumstances around Ashli Babbitt’s death were such as to bring discredit on the Air Force, if two airmen provided a military honors detail at her funeral or internment, presenting the folded flag to her mother. The next question to ask, beyond this post, is what procedure is set in place for first deciding and then providing an appeal process on the determination of Secretary of the Air Force Frank Kendall?

[Update:] All of the above pertains to federal law, governing Department of Defense and individual armed services’ actions. This includes the National Guard in federal status. However, federal law does not govern the Army and Air National Guards in their state status. Texas Governor Abbott has confronted Xiden and the Democratic Peoples Party’s deliberate subversion of our constitutional republic,  both on the border and COVID-19 diktats. Here, Abbott has a chance to confront Xiden, the Wicked Witch of the House, and their RepubliCAN’T collaborators in Congress. Governor Greg Abbott, as the commander in chief of the Texas Air National Guard, should order a full state military honor detail,  issue a Texas Memorial Certificate mirroring the Presidential Memorial Certificate, and provide a national flag for presentation to Ashli Babbitt’s mother. This would clearly, coolly make the point to the members of the Texas Guard, to the good and bad federal troops stationed in Texas, and to the federal tyrants that Texas has the will to fully exercise its authority to the limits of the real, the written and ratified, Constitution.