Climate rioters broke into and occupied the Department of the Interior last night. Over 100 of them were arrested. At least one security guard was injured.

I’m willing to bet none of them are going to sit in jail for months while awaiting trials that are continuously delayed.

I’m willing to bet the FBI isn’t going to go busting down the doors of their friends and acquaintances to see who else was involved.

I’m willing to bet none of the climate rioters were FBI informants.

I’m willing to bet there won’t be a Congressional Commission to investigate this protest; complete with a teary-eyed Illinois congressman lamenting the violent threat to our democracy.

I’m willing to bet that neither the Bulwark nor the Dispatch will publish “thoughtful” editorials about how disgraceful it is for a presidential administration to encourage this sort of behavior.

There was also a riot in Portland this week as Antifa mourned the death of one of their violent agitators. Over $500,000 in damage was done to downtown buildings and fires were set in the middle of city streets. Police made no arrests.

The mother of the deceased used Twitter to encourage violence at the event, because that’s what her son would have wanted.

I’m willing to bet her account does not get suspended. 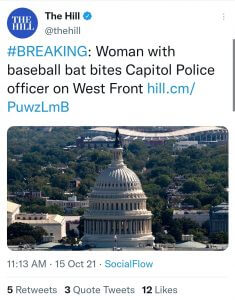