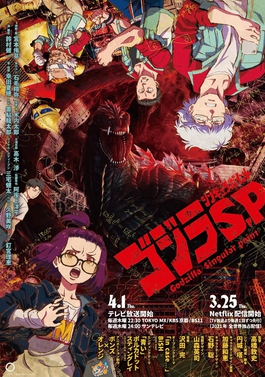 Forget Squid Game. The Asian Netflix you need is Godzilla Singular Point.  Any show that has time travel, Godzilla, Walt Whitman, William Blake, the Bible, the Bhagavad-Gita, and the Daodejing is a winner in my book.

It’s not easy to understand what’s going on. I’ll just try to summarize the gist of some of the main points for you, and I can only hope I got them right myself:

Chemicals from outside our dimension have made their way into our dimension; they’re terraforming the planet, and they’re and spawning monsters. Fortunately, a doohickey called the Orthogonal Diagonalizer can stop them if we get the right code to program it. Unfortunately, that right code can only come from the future. Fortunately, these chemicals can also do just enough time travel that our AIs will be able to use them in the future to send messages to themselves now with the right code!

But also–monsters.  And religious references.  And English poetry.

I’d even say it’s better than GODZILLA: Planet of the Monsters and its two sequels.

But let’s talk about that. 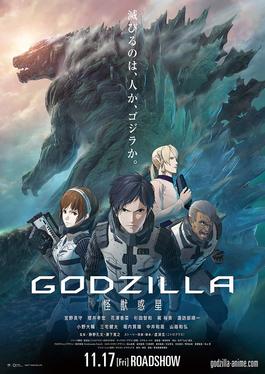 That one was pretty good, too–philosophically speaking.  It has some humans who have to make a choice.  The first movie rules out the option of defeating Godzilla easily.  That leaves just three options.

Option A is join the Bilusaludo aliens and become mechanical monsters in order to defeat Godzilla.  Transhumanism at its worst.  Bad idea.  The second film, City on the Edge of Battle, rules that one out.

Option B is to join the Exif aliens, who get a pretty impressive reveal as the worst and creepiest enemies of all–and just when they were looking like such comforting friends!

Exif religion is revealed as the purest nihilism, and the Exif act on their faith by summoning King Ghidorah, an interdimensional eater of planets, to destroy Godzilla–and earth with him!

Another bad idea.  The humans rule out that one in the third film, The Planet Eater.  That leaves them with just one option.  Option C is an ethics of acceptance, living in harmony with the natural world.  Let Godzilla own the earth.  Join the descendants of humanity, the Houtua.  No more dominating the planet.  Get rid of modern technology.  Make friends with Mothra. Breed with the Houtua.  And be content.

Option C, from what I can tell, is, more or less, some variety of Daoism.

Yeah, I know: You don’t like Daoism.  I’m not Daoist either.  I’m a Baptist

But given a choice between nihilism, transhumanism, and Daoism, I think this trilogy of Godzilla films makes the right choice.

And What About Those Fancy New Godzilla Movies from Hollywood?

Well, the monster fights are fun.  Setting up Godzilla as the ruler of the planet and as maybe a god of some sort isn’t exactly my cup of tea.  Maybe I’d feel better about it if the metaphysics were as well developed as in Planet of the Monsters and its sequels, where we’re at least led to believe that Godzilla represents the earth asserting itself against human abuse, where there’s no hint of a good G-d, and where there is King Ghidorah–a much, much worse god than Godzilla the defender of earth.

In the new Hollywood movies, from what I can tell, all we have is a smattering of weird monster stuff without much of an account of the world to tie it all together.  All we know is: There’s a bunch of ancient monsters, and Godzilla is their rightful king for some reason, and the monsters are good for the environment, and Ghidorah is some kind of alien who’s bad.  Also, we can’t kill Godzilla, but he can kill or control the worse monsters, so apparently, now, “This is Godzilla’s world. We just live in it.”

But the monster fights are fun.  And let them fight, says I!