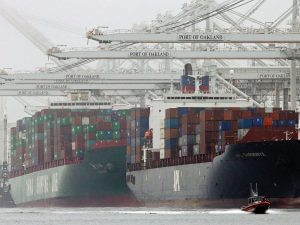 COVID was a life-changing event for the world and it has yet to be solved or rectified. Its origin was somewhere in China, maybe Wuhan (we know that is the origin). We’ve been on high alert for so long, and I’m tired of it. The infection curve went up, came down, went up again, and now it’s leveling off. So can we calm down yet? No, because it seems the next crisis is unfolding and this is in our supply chain. Several have posted what they are seeing, shortages, longer wait times, costs going up. I am getting nervous again when I read sentences like this, from an article called “Inside America’s Broken Supply Chain”:

This month, the median cost of shipping a standard rectangular metal container from China to the West Coast of the United States hit a record $20,586, almost twice what it cost in July, which was twice what it cost in January, according to the Freightos index. Essential freight-handling equipment too often is not where it’s needed, and when it is, there aren’t enough truckers or warehouse workers to operate it.

“It’s going to get worse again before it gets better,” said Brian Bourke, chief growth officer at SEKO Logistics. “Global supply chains are not built for this. Everything is breaking down.” (bold and underline is my addition)

Ports in California are clogged. New Jersey and New York, as well as in Texas and Georgia, are also seeing record pileups.

I am nervous because we have a president who assures us in a speech yesterday that the economy and jobs are growing and on track. What universe is he operating from? We have a vice president who is visiting a children’s school and skips a major border meeting with Mexico. So we have multiple, major crises and those in charge who could be working on these problems, aren’t.

I’m nervous because our current president stands before a fake White House room setting with the slogan Build Back Better on a board in the background (virtue-signaling to Klaus that America is on track). Several world leaders are using this same slogan including Trudeau, Boris Johnson, even Prince Charles, etc.).

Isn’t that a coincidence? Everything that we once counted on, like supply chains are screeching to a halt. Hmmm … interesting. Perfect timing to usher in the  ‘Build Back Better,’ a.k.a., Green New Deal on steroids, and goodbye free-market capitalism. Kick the oil and gas industry in the rear just when we need transportation and fuel costs down. Also, the cargo return costs are being greatly jacked up in (guess where?) China. We’re sending sometimes empty cargo ships to China, which means we’re not exporting, just importing, and paying their jacked-up freight costs. China is once again at the forefront because we’re too dependent on them for too many things (and they know it).

Remember “you will own nothing and be happy,” Klaus says. You will no longer buy cars, you will rent, you will, you will, you will… Is this another lever being pulled to usher in The Great Reset? It seems we’re not going back to normal after the pandemic. From Klaus’s dream last night: “Just let the systems fail. Then we have to implement X, Y, and Z – this is too easy!” Good thing there are only two shoes that can drop, unless these people have more shocks in store.