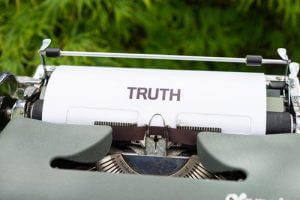 The title of this post is not just a philosophical statement. It is a living, breathing admonition of our culture, one that once fundamentally guided our decisions, our relationships, and our belief systems. Truth was the foundation of our education, of governance, and business. We all knew that it was not embraced by everyone—the liars, drama queens show up everywhere—but I believed they were the exceptions rather than the rule.

No more. And let me tell you why I find this fact deeply disheartening.

Just this morning on my walk I listened to the Ricochet podcast, High Noon, with Inez Stepman. I like her interviews because they are thoughtful and intelligent. This time she was interviewing Professor Robbie P. George of Princeton University, and I enjoyed his sharing his early education and understanding of the importance of knowledge for its own sake; he also spoke about his priority in searching for truth. So far, so good. Then he mentioned that one of his best friends was Cornel West, who is a professor on the far Left, a self-described Democratic Socialist. I am quite certain that they have found a way to bridge or overcome their differences; I have seen West interviewed, and he is a thoughtful and reasonable person. But I found that I was annoyed and highly skeptical about George and West’s relationship. Then I realized the reason.

Did they both believe in the importance of truth?

Now I have no way to answer that question and wouldn’t even try, because I expected that my reaction to their friendship, much more visceral than I would anticipate, was not about the two of them. It was about me.

More specifically, it was about a relationship that I occasionally refer to on Ricochet, because I struggle with it. Like George and West, my friend and I are both religious people; I’m the conservative, she’s on the Left. I refuse to talk politics with her primarily, I thought, because she is not well-informed on the topics we would discuss. She doesn’t do her homework, relies on anecdotes, the evening news, and a liberal newspaper. I finally realized today that was not a complete description of my frustration toward her; instead, I’m saddened because ultimately, she is not interested in the truth. For the record, I’m not saying that I have the complete truth and she doesn’t have any. But I’m especially disappointed because in so many ways she is a loving, compassionate and wise—yes, wise—person. She would be appalled to be thought of as lying, but she doesn’t so much lie as for any number of reasons, she chooses to avoid the truth.

Now I must say that I realize that “truth” can seem to be a moving target. This explanation of truth spoke to me:

According to the coherence theory of truth, a thing is more likely to be true if it fits comfortably into a large and coherent system of beliefs. It remains that the system could be a giant fiction, entirely detached from reality, but this becomes increasingly unlikely as we investigate, curate, and add to its components—assuming, and it is quite an assumption, that we are operating in good faith, with truth, rather than self-preservation or -aggrandizement, as our aim. Thus conceived, truth is not a property, or merely a property, but an attitude, a way of being in the world.

I believe that most people on the Left have created a “giant fiction,” and are unwilling to investigate and test their assumptions. In other words, they are living a lie.

We all create our own reality; that is how we make sense of our world. But we only live productive and satisfying lives, if we experience the following:

Truth tends to lead to successful action. In that much, truth has instrumental value. But truth also has intrinsic value. Given the choice between a life of limitless pleasure as a brain in a vat and a genuine human life along with all its pain and suffering, most people opt for the latter.

If we love our lives, with all the suffering and disappointment we may encounter, we are more likely to be living in truth. But when we try to “live lies,” desperately trying to stabilize the fragile and weakened walls of reality, we can’t be truly happy at the most basic level. We may tell ourselves that we are, but that is just one more lie to add to the heap.

I’m struggling with this discovery, and wondering if it is reasonable and true. And if it is true, where does that leave me regarding friendship? I anticipate that I will continue my relationship with my friend, knowing that at some level I have relegated it to a more superficial status. But it will be difficult. I love my friend for so many other reasons. And I know that I am not always aware of the facts, of the truth. But I’d like to think that I am a truth-seeker and truth-teller.

At least, that’s what I aspire to be.