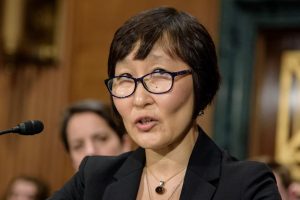 Saule Omarova has been nominated to US Comptroller of the Currency. I can’t verify that she is an official member of the Communist Party, but everything else about her plans for this position, if she is approved, declares her embrace of Communism loud and clear. You wouldn’t know, however, her preference for Communist ideas from most publications:

Ms. Omarova is currently a law professor at Cornell University, where she serves as the Director of the Program on the Law and Regulation of Financial Institutions and Markets of Cornell’s Jack Clarke Institute for the Study and Practice of Business Law.  The White House’s press release describes her as ‘one of the country’s leading academic experts on issues related to regulation of systemic risk and structural trends in financial markets.’

It sounds like an impressive summary, doesn’t it? Another publication does mention reasons for some resistance to her nomination:

Omarova has written in favor of restructuring the Federal Reserve and recommended that it provide bank accounts for consumers, which she has argued would make the financial system ‘less complex, more stable and more efficient in serving the long-term needs of the American people.’ That view is likely to make her nomination controversial, particularly for Senate Republicans.

Earlier this year, she told POLITICO that large financial institutions ‘hold so much power now and they move so much money through their own channels that it is effectively impossible through just rules and some enforcement to really shape what it is they’re doing.’

If you want to learn more about her intentions, you can read her report. In part, the abstract of the report says:

[This article] offers a blueprint for a comprehensive restructuring of the central bank balance sheet as the basis for redesigning the core architecture of modern finance. Focusing on the U.S. Federal Reserve System (the Fed), the Article outlines a series of structural reforms that would radically redefine the role of a central bank as the ultimate public platform for generating, modulating, and allocating financial resources in a democratic economy—the People’s Ledger.

“Radically redefine” sets off alarm bells for me—as well as the “People’s Ledger.” A bit Marxian, don’t you think?

All of these descriptions might make you feel slightly uneasy, but progressives tend to have that effect on most of us, and in some ways we’re getting accustomed to their demands. That might have been my reaction, until I read this Wall Street editorial:

President Biden checked off another progressive identity box last week by nominating Saule Omarova as Comptroller of the Currency. Some Trump appointees were ridiculed for having supported the elimination of their agencies. Ms. Omarova wants to eliminate the banks she’s being appointed to regulate.

The Cornell University law school professor’s radical ideas might make even Bernie Sanders blush. She graduated from Moscow State University in 1989 on the Lenin Personal Academic Scholarship. Thirty years later, she still believes the Soviet economic system was superior, and that U.S. banking should be remade in the Gosbank’s image.

‘Until I came to the US, I couldn’t imagine that things like gender pay gap still existed in today’s world. Say what you will about old USSR, there was no gender pay gap there.’

The link above to the People’s Ledger will provide the details of her report; I think that this excerpt from the WSJ is worth noting:

Ms. Omarova believes capital and credit should be directed by an unaccountable bureaucracy and intelligentsia. She has recommended a ‘National Investment Authority,’ with members overseen by an advisory board of academics, to finance a ‘big and bold’ climate agenda. Sounds like the green infrastructure bank the Senate rejected.

She’d also like a politically and structurally independent ‘Public Interest Council’ of ‘highly paid’ academics with broad subpoena power to supervise financial regulatory agencies, including the Fed. The Council, she explained, would not be subject to the ‘constraints and requirements of the administrative process.’ Ivy League professors know best.

I can’t help cringing at what is basically a federal government takeover of the banking system, her desire to finance a “big and bold” climate agenda, and a reliance on academia oversight.

You might think I am overreacting to her nomination; after all, Bernie Sanders has been around lauding the Soviet Union/Russia for a long time. But he is just one man, and most of the time he is spitting into the wind in the Senate. Although some of Ms. Omarova’s plans require legislation from Congress, her open declaration and support of Communist/Marxist goals could lead to both anti-American and damaging actions toward the banking system. This is not a woman who only supported these ideas in her younger days; she still enthusiastically espouses them today.

And Joe Biden knows it.