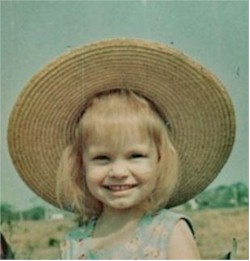 Most truly honoured, and as truly dear,
If worth in me or ought I do appear,
Who can of right better demand the same
Than may your worthy self from whom it came?
The principal might yield a greater sum,
Yet handled ill, amounts but to this crumb;
My stock’s so small I know not how to pay,
My bond remains in force unto this day;
Yet for part payment take this simple mite,
Where nothing’s to be had, kings loose their right.
Such is my debt I may not say forgive,
But as I can, I’ll pay it while I live;
Such is my bond, none can discharge but I,
Yet paying is not paid until I die–Anne  Bradstreet

Anne Dudley Bradstreet — the first published Puritan poet of any substance — was born into comfortable circumstances in the North of England in 1612 and got married at the age of 16 to Simon Bradstreet. The young couple, along with Anne’s parents, emigrated to the New World in 1630 (Anne was 18), ultimately moving to Cambridge, Massachusetts, in 1632, where Anne, despite lifelong poor health, accommodated herself to her new and very different life (including early years of hardship and privation) and had the first of her eight children.

Eventually, the family settled and prospered, and both her husband and father served, at one point or another, as governor of the Massachusetts Bay Colony and were instrumental in the founding of Harvard University, from which two of Anne and Simon’s sons graduated.

She died at the age of 60, in 1672, from tuberculosis, and after a long struggle with increasing paralysis and pain, the aftereffects of a childhood bout of smallpox and a subsequent go-round with scarlet fever. Too short a life, and one which demonstrates, if any proof of such were needed, that being born into comfortable circumstances is no guarantee of a particularly comfortable life.

But, upon my reacquaintance with her the other day, it was her writings that struck me. She’s well educated. And she speaks her mind, and writes about whatever pleases her. The only book of poetry published in her lifetime, “The Tenth Muse Lately Sprung Up In America,” by A Gentlewoman in Those Parts, was first published in England, anonymously (because, you know, woman), and contains a series of poems in the Elizabethan tradition on subjects that interested her. They’re technically good, but rather imitative, and it’s not until her later poems, many of which were not published until the mid-19th century, that she really finds her voice, writing in a deeply personal, sometimes questioning, vein about her life, her struggles, her accomplishments, and her faith. The full text of all her works (poor formatting) can be found here. As I skimmed through, I felt her reaching across the centuries, and I found myself wishing I’d known her. I think I’d have liked her.

Anne Bradstreet’s father was Thomas Dudley (now there’s a name from English history!), a devout Puritan and military man who, after immigrating to the Massachusetts Bay Colony, set about improving the situation, the morals, and the education of its residents, founding what is now Cambridge, Massachusetts, establishing schools, becoming a charter member of the new Harvard College, and serving several terms as governor of the colony. His relations with his daughter and son-in-law remained close and cordial (Simon Bradstreet also served as governor of the colony and supported Thomas in his efforts to maintain the strictest Puritan standards in their small society). As can be seen from the above sonnet, Anne loved her father very much and remained grateful for his gift of life, crediting him with her success and accomplishments, which she viewed as a lifelong debt.

Loyaute m’oblige. “Loyalty binds me.” That was Dad’s regimental motto, one he lived every day of his life, and one he impressed upon all three of his children. He died 14 years ago, on Sept. 30, 2007. Not a day goes by that I don’t think about him. Loyaute m’oblige. Here he is on one of our last visits together, saying hello to King John in Worcester Cathedral. 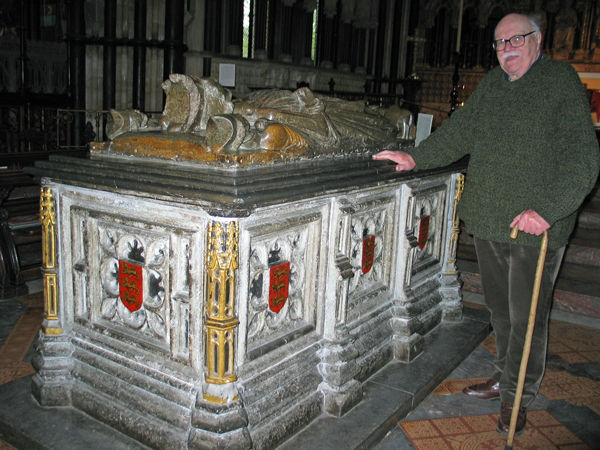 Such is my debt I may not say forgive,
But as I can, I’ll pay it while I live;
Such is my bond, none can discharge but I,
Yet paying is not paid until I die

I think Anne Bradstreet had it about right.

Note: The same biographical information about Anne Bradstreet also appears in another post of mine about her, from a few years ago.