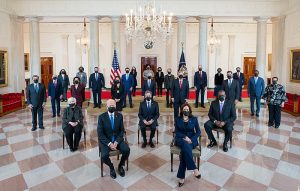 So much has already been said about President Biden’s dementia (no, I’m not going to use some other politically correct term) that I won’t belabor the fact that we can plainly see his limitations. But there is a larger issue that, coupled with his dementia, puts the country at serious risk.

The man is seriously immature.

Now many of us know people who lack immaturity into adulthood and they often make a mess of their lives. They are impatient, irrational, and petulant; they often lack the ability to weigh consequences or develop a long-term picture; they live in “the now.” They are idealists. They are disrespectful to others and demand that their needs and expectations be met.

Joe Biden has demonstrated all these attributes (or drastic limitations) on multiple fronts. To enact 61 Executive Orders, many of them on his first day of office, shows his lack of patience; that several of the Orders reversed Trump orders shows a petulance of the first order. His impatience was also present in his insistence to hold to the August 31 deadline to leave Afghanistan, removing all troops and leaving behind the very people we promised to save. We also saw his impatience when flights left Afghanistan in such a disorganized fashion, removing unvetted Afghans and deserting our countrymen, just to “get people out.” (When General Milley proudly explained our extensive vetting through terrorist databases of the Afghans who mobbed the planes to leave, he neglected one detail: many of the terrorists may not have been apprehended by the government and therefore don’t appear in any database.)

Then there are Biden’s many distortions of and the confusion about the Covid-19 pandemic. He just couldn’t wait to impose mandates on the unvaccinated, when all the data suggests that most of the country is vaccinated; that according to the original criteria, herd immunity has been met; that many people (including many who’ve not been tested for antibodies) already have the more powerful natural immunity. But Biden was going to show us who was boss. So, all the unvaccinated needed to get in line for vaccination or risk losing their jobs.

When it comes to his being irrational and petulant, I propose that insisting on the August 31 deadline in Afghanistan fit both. He wasn’t about to change that date for anyone. I’m not convinced that he couldn’t have simply told the Taliban that he was going to cancel that deadline until everyone was evacuated. But of course, that would have taken too much time. (I guess I forgot “impatient” for this point.)

Looking at the reversal of the Keystone Pipeline approval, the canceling of the wait-in-Mexico law, and his insistence at reviving the Iran agreement, you could point to all the attributes identified: his reversals showed his immaturity, since they showed his petulance in reaction to Trump actions; that he didn’t weigh the long-term consequences of his actions was obvious, given that he didn’t plan for energy shortages or the alienation of Canada; to pursue an agreement with Iran in spite of their refusal to stop their efforts to produce a nuclear bomb, and their other aggressive actions, we demonstrated that nothing could deter us from working with them and that over time, they could betray any agreement.

There’s a lot more evidence for Joe Biden’s immaturity and the role it plays in his decision-making. Some people will say that those attributes can also show up with dementia, and they can. Joe Biden, however, has shown these attributes in spades for most of his adult life, and in his new role, they’ve been exacerbated. And they have made the conditions in the United States more dangerous when you couple his behavior with his lack of mental capacity.

We are more at risk than ever before.