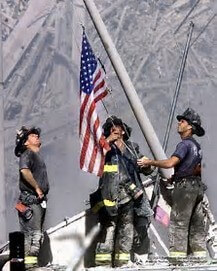 Writing this on the eve of 9/11, like all of you, I feel like I am in a brave new world. We just came from a so-so Mexican restaurant..  My first choice was a fresh grouper basket with slaw, but the tourists are still here in droves, and we couldn’t inch our way into any place serving seafood. Our naturally pretty Hispanic waitress had multi-colored hair wrapped in braids – pink, blue, purple, and yellow. Her arms were heavily tattooed, going up her neck. The tattoos were not new, yet she looked too young to have aging tats.  My new neighbor across the street has the same rainbow hair. I looked it up – a) rebellious b) fashion statement c) relating to the LGBTQ agenda d) signaling a multi-gender identity. Ok.  We now have a brave new world where gender is being questioned on birth certificates, taught to kindergarteners who know nothing except innocence.  Disney has even released a new Cinderella that features a fairy godmother that is essentially a gay man in high heels and a dress. Brave – cough – new world.

I wasn’t eavesdropping on the booth behind us, but it was a pile of kids and I couldn’t help hearing their woes about being stalked on social media by a loose character they all had to block.  A world lived online – people behind a wall – lots of opinions – harassment. Anonymous. They were laughing about it, but the conversation was disturbing.  Brave new world.

Enter a mutating virus and vaccines that may or may not work that well. Enter mandatory vaccines from our government and industries, schools and government employees, numbering in the millions that may lose employment if they don’t succumb to the shots.  Have we ever been here before? This is extremely dangerous, disturbing and has no place in a free society.  Brave new world.

We had three club chairs hauled off to be recovered. I searched several counties to find a decent upholstery person.  I called around and weighed the cost of purchasing fabric plus labor versus new chairs.  We visited furniture stores. The upholsterers told me if the furniture is light, it’s junk.  They’re ripping off fabric from Lazy Boy and shocked to find plywood and particle board. The average cost for a decent chair is now double what it cost to recover.

I found Lopez through a neighbor. When I first called him I asked if he was taking on any more work, as the other places were booked months ahead.  He said unless I win the lottery, yes.   He had a nice website, came and introduced himself and picked up my chairs and fabric. He’s Hispanic and can’t find help. “This is a skill – an art that has to be taught.  No one wants to learn – I can’t find help.” he lamented.  He advertised all over – Facebook, all the popular sites and got two responses. One was out of state and only wanted to know the pay.  “Where did everybody go?” he asked.  “No labor – no one wants to learn or earn their money.” he said and shook his head.  Brave new world.

I’ll add this note to my quest for the right fabric. I visited a Joann’s Fabric Shop.  They’ve been around forever.  I didn’t find anything, but we wandered to the book section in the back – books on sewing, gardening, cooking, and witchcraft…….I kid you not. There was front and center, several books on white witches, and a full-blown book, red, with the face of the devil on the cover, on Satanism.  All the books had spells, conjuring, how to use snakes.  I was beside myself.  One of the girls that showed me to the upholstery section had rainbow hair. She was very sweet and I hope, ignores the book section.

I read that Toyota was cutting its new car production by 40% due to a chip shortage?  We passed a Toyota dealership a week ago – the lot was almost empty. Quote from World Economic Forum – “you will own nothing and be happy”- including no cars. Brave new world.

Lastly, many are posting where they were on 9/11 and where were you?  I don’t want to say except in Boston and for years after, it was like having PTSD, watching the footage.  I balled like a baby.  The 20th anniversary does not fill me with peace, because of the recent actions of our current president and his administration. Our soldiers, our country, and our allies made deep sacrifices to fight the war on terror after that fateful, dark day.  Yet, in a series of bad judgments, he handed back to the terrorists, a country on which to wage jihad again.  No – I won’t relive it.  I don’t want to hear about the Taliban. Twenty years was enough. What comes after is anyone’s guess – but we are handing over a Brave new world that we hardly recognize.

I will honor our American flag tomorrow, our men and women in uniform, and remember the decent, the brave, and honorable that have sacrificed in our country’s past and still continue at this moment.  They’ve gone to distant shores to protect the freedom and safety of innocent people all over the world, so I still have hope that good, and not evil, will prevail.  Be brave in this new world….