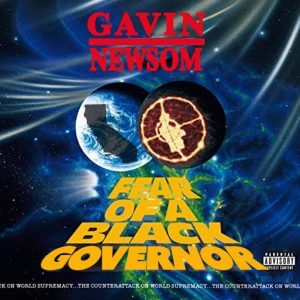 I live in the enlightened state of Arizona. Of our last six governors, four have been women. The first governor I remember was Raúl Castro, a Mexican immigrant. (When I was a little kid, his state limo passed our clunky Chevy on the road and I got him to wave back at us. I was so proud, but then again, Arizonans are a tolerant people.)

Racist progs are even attacking Elder in the streets. Early Wednesday, a woke white woman put on a gorilla mask and hurled a white egg at the “Sage of South Central.” You read right — a gorilla mask.

Breaking: A flying egg narrowly missed the back of recall candidate @larryelder's head after it was thrown by an activist wearing a gorilla mask in Venice. A scuffle broke out and the candidate was escorted into an SUV.

Talk about white fragility. California Democrats are pulling out all the stops to prevent their state from ever having a BIPOC governor, so I expect the intolerance to grow. All the regressive progressives care about is protecting their white supremacist patriarchy.