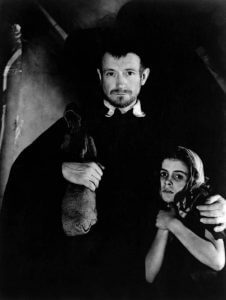 Monsieur Vincent and the girl

Monsieur Vincent is set in a time of spiritual blight and was produced in a time of spiritual blight. A French film from a “text” by Jean Anouilh, the playwright of Antigone, Becket ou l’Honneur de Dieu, and many, many more that are out of print. I found audiobooks of Antigone and Becket from LA Theater Works and snapped them up instantly, but it is bizarre that Anouilh has fallen out of print. There was a controversy at the time stemming from the production of Antigone under the Vichy government combined with the sympathetic treatment of Creon the pragmatic tyrant vis a vis Antigone the idealist that in the trauma and carnage of the just defeated Nazi occupation led no less a figure than President Charles de Gaulle to publicly express concern about Anouilh’s politics. But that is not why I asked you here. Leave it at, Anouilh was a much too fascinating to ignore like this and is expert in the juxtaposition of philosophies in conflict. Even as he tries to avoid the pointy end of the passions of the day.

Let me start over. Monsieur Vincent is set in a time of spiritual blight. He was ordained in 1600 and, according to the movie, at least, the Church was at a low ebb. It is 1617 and M. Vincent is bound for Chatillon, a town where no one is on the street, but there are rocks thrown at our hero from various doors and windows. He comes to a ruined church with squatters. It has been many years since a priest has held mass in the town. Vincent continues to the house of M. Benier, who is holding a grand orgy but will not grant Vincent entrance because “these idiots could let the plague into my house.” M. Benier has arranged for the Church to send a priest, Vincent as it happens to turn out, to improve the spiritual climate in Chatillon. Or something. The servants cover their faces and cower while allowing Vincent in at Benier’s command.

It is quickly related that there is a woman believed to have plague who has been barricaded in her home. Vincent means to visit her, to the extreme horror of the assembled gamblers and smokers and harlots. He creates a scandal by following through with his scheme. As he tears down the boards nailed across the woman’s front door, the rock throwers use the opportunity to improve their aim to bad result, but he does not succumb. Those heavy cloaks are more useful than they first appear. The woman is dead but Vincent finds a young girl, hungry but in good health, also trapped inside. On emerging with the young girl, the barrage increases again in accuracy and intensity. This plague town is a clear forerunner to Cancel Culture. He goes to see the carpenter to have a coffin made. The carpenter, or someone in his household, would rather poor the contents of his chamber pot out on the priest and a small girl than accept a commission. His descendants will come to run teachers’ unions the world over.

Vincent proceeds to the manor on the hill, where the lord of the village is urgently practicing his swordsmanship to better plan Chatillon’s response to the plague. When Vincent introduces the girl as a plague victim’s daughter, the entire household covers their faces and flees to the far end of the room. Pierre Fresnay as Vincent eats these scenes up, wry and a touch incredulous, as you would expect from a science denier unlearned in the horror of la Peste. Oblivious to his imminent peril, Vincent undertakes to build a coffin for the plague victim himself. At the burial, the sound of the church bells and the sight of a priest in the church yard is enough to draw curious villagers from their locked homes. They assemble in the hundreds to watch, packed together like Marxist protesters, immune to the effects of la Peste because, well, the science! As Vincent turns to go into the church, a young boy throws one last rock at him

M. Vincent will single-mindedly pursue the greater welfare of France’s poor and homeless for more than another hour, but M. Anouilh has already captured the Age of Covid with wit and style, sight unseen. If you hate to see wealthy people guilted into serving the poor and starving when they should be left to their orgies and sword practice, and ask if there are no prisons and no poor houses, this is not the film for you. If you remember that He said, what you did for the least of these, you have done for me, enjoy the movie. Even in rich America, our political class is churning out newly minted poor at an historic rate. A signal accomplishment. In English, Monsieur Vincent is a French film available with English subtitles, perhaps the best example of M. Anouilh’s work is the 1964 film Becket, with Richard Burton and Peter O’Toole. M. Anouilh has a lot of other credits, mostly en français, I think I’ll sniff around there some more. Oh, and Monsieur Vincent won the American Academy Award in 1948 for the best foreign film released in the US that year, and is also on the Vatican Best Films List. And Father Vincent de Paul is now also known as Saint Vincent de Paul.

Now where did I leave my college copy of Antigone?

This is my second review in the In a Time of Covid series. The first was “Sullivan’s Travels in the Pandemic”