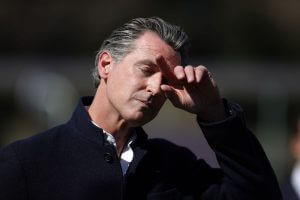 On September 14, Californians will face a ballot issue in two parts. Part 1 is simplicity itself: “Shall Gavin Newsom be recalled (removed) from the office of governor?” If the answer is yes, what follows is a weird procedure whereby all of the qualified replacement candidates for the office will be listed, from which the candidate “receiving the highest number of votes” will fill out the remainder of the current term, which ends on January 2, 2023.

This recall procedure was put into place in 1911 as part of a progressive reform movement to circumvent the legislature and the ordinary election cycle, in order to improve the odds that an outsider could wrest control over the political processes from corrupt insiders. In a twist of fate, that recall process is now being used against an unabashed progressive for the same reason: to take control from the political branches in order to neutralize one-party rule widely seen as unresponsive to the will of the public at large. And if it fails, it is likely because all the big money is behind Newsom, whose $51 million (and counting) is more than double that of all the forces arrayed against him.

Yet the remarkable structure of the recall procedure may keep the race close. The process first makes Newsom a stand-alone target, after which the huge free-for-all among multiple candidates could permit a fringe contender to take the election with only 14 percent of first place votes. Thus, the current system does not allow ranked-order priorities (whereby second and lower choices matter), which earlier this year created so much uncertainty in New York City’s mayoral election that the (relatively) conservative Eric Adams managed to squeak by a long list of more progressive candidates. Transposed to California, the first-past-the-post system could result in the selection of Larry Elder, a staunch and controversial conservative talk-show host in a strongly blue state.

The prospect of that sudden transition has the liberal media in a state of deep dread, not so much for what will happen in California but for the national repercussions. Senator Dianne Feinstein is said to be in failing health, and if she should either die or resign while in office, the California governor would make an interim appointment to fill that seat.  With Elder as governor, the US Senate flips to 51-49 Republican, at which point the entire Biden agenda goes up in flames: no new infrastructure legislation, no transformation of the voting rights system, no major antitrust reform, no steady stream of liberal democratic judicial appointments, no general legislative push toward solar and wind energy. Yet the odds of Elder winning the round two derby have been enhanced because the Democrats thought (rightly) that it would be a mistake for any Democrat to put his or her name in the second ballot, lest it induce swing voters to shy away from Newsom in the hope that another Democrat could be chosen in part two of the ballot. This strategy could backfire, however, because the want of any Democratic candidate on the second part of the ballot will induce anti-Newsom people to come out in force, knowing that they prefer anyone whose name is on the second list to the current incumbent.

To make matters still more complicated, the California recall is likely to turn not on broad geopolitical issues but on local matters of direct concern to Californian voters. At the symbolic level, Newsom got into serious trouble when he dined at, perhaps, California’s toniest restaurant, the French Laundry, without masks—in violation of his own COVID-19 restrictions. Many people rightly throw up their hands at such large issues as climate change, electric cars, power blackouts, rising crime rates, housing shortages, and the gig economy, but they can smell a hypocrite a mile away. Hence, this singularly unimportant incident acts as a powerful beacon that gives people who are uncertain on big substantive policies a reason to support the recall. A person who violates a minor rule, the thinking goes, cannot be trusted to lead a state whose economy is over $3.2 trillion per year.

Indeed, that demonstration in the here-and-now may well prove more powerful than the standard element in the current Democratic playbook, which argues that even a bad Newson is better than a terrible Trump clone who is sure to lead California badly astray on domestic policy. In what looks to be a close race, it is an open question whether this strategy will work, now that Trump is more than six months out of office and a set of international calamities in Afghanistan has tarnished the Biden legacy. Many Democratic writers now treat the recall as antidemocratic.

But in my view, the decisive arguments in favor of the recall in this case are simple. Single-party government over any long period of time will everywhere lead to inevitable forms of corruption as powerful and entrenched interest groups are able to coalesce their power. Separation of powers is at its lowest ebb when all branches of government are in the hands of the same group of insiders. Any judicial check on the aggrandizement of power is less likely if, as is the case in California, its sitting supreme court justices are appointed and then approved by voters, and share the same progressive tendencies as both political branches of government.

At this point, there is much to be said for the general proposition that a new broom sweeps clean—that it is more important to remove Newsom than to fret over who is likely to be appointed in the second stage. But it is a mistake to assume that none of the underlying substantive issues should be taken into account. In one sense, California looks to be in great shape, as its $3.2 trillion–plus economy churns out record tax revenues and is home to a financial elite that the progressives hope to subject to both a top income tax rate of 16.8 percent and a state wealth tax. This combination, unfortunately, might induce some of its most successful citizens to leave before it is enacted, lest they be faced with a hefty exit tax after waiting too long.

But the malaise cuts even deeper than this. Governor Newsom has constantly boasted that California is a great state for doing business, but the evidence suggests that the Golden State has lost some of its long-time luster. The number of corporations that are pulling up stakes in California is rising sharply: companies like Oracle, Palantir, and Hewlett-Packard, and billionaires like Larry Ellison and Elon Musk, are all headed to lower-tax states. That exodus is being joined by many young entrepreneurs and middle class workers who recoil at the high housing costs in California, driven by strong zoning and environmental laws. In the latest census, California lost electoral votes for the first time since gaining statehood in 1850. Keeping the current leadership will do nothing to inspire the confidence needed in local government to be able to stem the hemorrhaging, leaving a hollowed-out demographic with some aging superstars and a large concentration of low-income persons.

There are, in principle, two ways to respond to these pressures. The first is to double down on certain bad policies that go after the usual dubious suspects. That is exactly what California is doing with its war on fossil fuels through its electric car mandates, which wouldn’t be necessary if these cars could deliver their promised efficiency, but which will unnecessarily raise the costs of new automobiles if they do not. At this point, the law of unintended consequences will kick in, so that the higher costs of new cars will induce owners to keep their older, dirtier cars on the road longer. That same deadly cycle will take place with housing restrictions that force people into ever longer commutes that, guess what, result in higher levels of emissions.

The alternative path, shunned by the current governor, should be taken no matter who prevails in the recall election. Market liberalization is the only path to undo the mess in which California finds itself. Competitive markets increase output, profits, and, yes, even tax revenues. They reduce the heavy costs of the administrative state by removing scads of misguided regulations from the books. Higher revenues and lower costs are the one magnet that can induce Californians who are teetering on the brink to stay in the state.

California did not become an economic powerhouse by expanding transfer payments and choking technical innovation. It will not be able to regain its place in the sun if it continues to double down on its current policies. The same basic principles that made Adam Smith a household name apply today. The state should do a few functions well––ensuring safety and order, which cannot be done by defunding the police, and supplying infrastructure. But the moment it loses sight of these core missions, it will go deeper in the downward cycle that sparked the political rebellion behind this recall election. Should Newsom survive this vote, he should alter his current policies lest California continue to decline.