They had her kneeling on the shore facing the water. “I was waiting for the blow” recounted my grandmother of that mid-December day in 1978.

A few days before, grandma and several other women in the village were ordered to the river to make prohok, as it was prohok season. The morning of that fateful day, one of the women was granted permission to go home later in the day. Grandma stashed away three fish carcasses to send along with the woman to my mother and her siblings. Mom and her brothers could salt and grill them to eat in the morning, all in secret of course. The village official found out and the security force brought grandma to the shoreline. As recounted later by survivors, one method of single killing, if one lived near a river, was to bash the head or slash the throat of the victim and push him/her into the water (bullets were too valuable). Another method was to take the victim to the middle of the river and drown him/her (happened to the daughter of our family’s friends, her father watched quietly from the shore).

With grandma kneeling on shore, the Khmer Rouge cadre listed her crimes and the punishments. “Stealing from angkar makes you an enemy” and “eating in secret makes you an enemy of angkar” and many more that grandma couldn’t quite recall. All she remembered was the feeling of resignation, that she resigned herself to the fact that they were going to kill her soon, that she will never see her husband and remaining children again. But then the cadre said she considered my grandparents good people so she let grandma go home for the day, but to report back to work the next morning.

Since early December everyone could hear the sound of fighting in the distance. The sound kept getting closer and closer as December went on. Grandpa, who was assigned to guard the crops every night along with one village officer, had heard bits and pieces of news on the officer’s radio. And the news was not good for angkar. He believed things were about to change very soon. In the morning when grandma was supposed to go back to the worksite, grandpa told her not to go back yet. Grandpa and his friend (friendship formed in hardship) came back from the worksite about midday and told grandma that the Khmer Rouge security force was gone from the village. He was afraid that if they came back, they would kill everyone. With children and family members all gathered along with some rice and meat scavenged from the kitchen, two families made their escape back to Phnom Penh.

Grandpa was right. After the dust settled, they found out that the security force did indeed come back later that night. My family estimated that there were about 400 people in the village, not counting the base people (people already there before the Khmer Rouge took over), and only around 10 non-intact families survived. 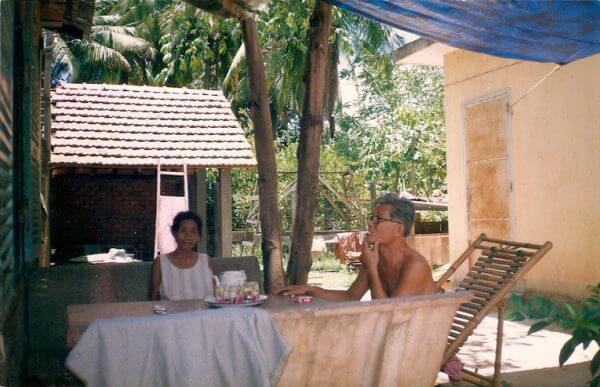