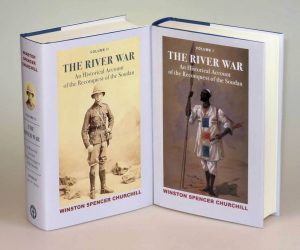 Back in 1989, my old friend James Muller of the University of Alaska at Anchorage made a discovery. He was in London. He had access to the libraries there. And while rooting about he found out that Winston Churchill’s first truly great book – The River War: An Historical Account of the Reconquest of the Soudan, which he had published in 1899 – had never been reprinted in its original form, that what had passed since 1901 as that work was an abridged, much-revised, and toned-down version of the original. He also discovered that the original work, though in places impolitic, was a genuine treasure – and he set out to make that treasure accessible again and took me along for the ride.

It has been my privilege to follow the evolution of this project now for more than three decades and to take joy in its completion. Jim Muller is a perfectionist. So he did not think it sufficient to usher the original version of The River War back into print. Instead, he decided to do what classicists call a critical edition – including the original maps, the original line drawings, the original photographs, and everything that was added in subsequent editions; marking everything that was eliminated; adding in an appendix the newspaper articles on which it was in outline based; digging up the dispatches that served as a basis for the published articles, transcribing them, and including them as well; adding notes identifying everyone and every place mentioned in the text and a host of appendices elucidating what happened; and writing an introduction about the detective work done, the various editions published, the history of the work, and its evolution, which runs nearly one-hundred-fifty pages. It is like no book published in the last hundred years. It will show readers why Winston Churchill won the Nobel Prize . . . for Literature, and it will cast light on the current discontents. For the reconquest of the Sudan involved the suppression of the first great modern Islamic-revivalist revolution, and the troubles that the British had to face are not unlike those we face right now.

And, best of all, it is finally in print. St. Augustine’s Press brought it out some months ago, and here are excerpts from the reviews:

“One is left in awe before this stupendous scholarly achievement, which only years of patient research on several continents could have produced.”
— Antoine Capet, Cercles

“An impressive scholarly edition of great significance not only for those interested in Churchill, but also for imperial expansion at its heyday.”
— Jeremy Black, The Critic

“A towering work of scholarship and one of the most remarkable books to appear in many, many years.”
— Andrew Roberts, The Wall Street Journal

“Publisher and editor share in an old British triumph, which is as instructive for us now as it was for Churchill’s countrymen then.”
— Will Morrisey, City Journal

“The River War, Winston Churchill’s account of the reconquest of the Sudan, was arguably his best book. This definitive edition makes these magnificent volumes an indispensable part of the Churchill canon.”
— Piers Brendon, Literary Review

“In the first edition of The River War, Churchill demonstrated the greatness that lay before him. James Muller and St. Augustine’s Press should be applauded for the immense labor of producing this magnificent new edition.”
— Daniel J. Mahoney, Claremont Review of Books

“A serious monograph on a neglected episode of military history, a vivid first-hand account of a formative experience in its author’s life, and a cracking good story, too.”
— Daniel Johnson, Law and Liberty

“In Professor Muller, Winston Churchill and The River War have found an editor of immense scholarly energy and integrity, who has produced an edition worthy of his labor and of the great man who lived and wrote the work.”
— Ted R. Bromund, Finest Hour

“No collector of Winston Churchill’s works can afford not to own the 2021 edition of The River War. Whether you own the 1899 edition is immaterial. This new work is indispensable.”
— Ronald I. Cohen, Hillsdale College Churchill Project

As one would expect, the first printing, some 500 copies, sold out. Now, a second printing has arrived – this time 1200 copies. Although this two-volume edition costs $150, most of the 1,200 were on backorder and are now being shipped to the purchasers. A third printing is planned, and it will be larger yet. But whether it will be available before Christmas is highly doubtful. The printer, in Quebec, has reportedly been hit hard by the coronavirus, and it no longer has the staff to produce so complex a book. And so the publisher is in search of a printer for the third printing, and that will take time.

So, if you find this book intriguing and want a copy for yourself or want to order it as a gift for someone else, the time is now. The best way to do this is to go directly to St. Augustine’s Press by clicking on this link.