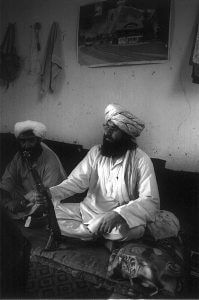 As if the debacle in Afghanistan were not enough, now we have to be seriously concerned with the threat to our own national security. Our southern border will provide the ideal entry for the Taliban, al Qaeda, or ISIS to wreak havoc right here at home. And now that they have been armed and empowered, we should be worried.

We’ve long been aware that the border has been vulnerable to potential terrorists:

Four foreign nationals, whose names match those on the terror watch list, have been stopped trying to enter the U.S. vis the southern border since October, a congressional aide familiar with Customs and Border Protection (CBP) information told Fox News.

That information shows that three migrants from Yemen and one from Serbia were picked up at the southern border by U.S. Border Patrol since the beginning of the fiscal year in October.

Only four? The Department of Homeland Security says these arrests are “extremely rare”; I guess that we are supposed to find that news comforting, although given the poor border security, no one knows how many other terrorists have actually found their way into the country. And how many terrorists do you need to bomb a building?

Now we face a whole new dilemma with the release by the Taliban of thousands of prisoners in Afghanistan. The prisons, which were part of Bagram Air Base, were taken over by the Taliban when we abandoned the base. Arizona Attorney General Mark Brnovich wrote to President Biden about the threat, referencing a video sent out by former Border Patrol Chief Rodney Scott:

‘These statements from a high-ranking Border Patrol official are frightening — especially as Americans are watching news coverage of thousands of prisoners, including many terrorists, being released by the Taliban in Afghanistan,’ he wrote to Biden. ‘Americans are now facing an unprecedented terrorism threat level in their own backyards.’

Since Biden doesn’t seem in touch with the disaster in Afghanistan, I suspect the last concern he might have is the potential of a terrorist attack in the United States. In fact, he may very well have become complacent about terrorism, since the dangers of terrorists crossing the border have been pointed out several times since Biden took office, and border security remains vulnerable. And we haven’t had a major terrorist attack in many years.

I might even ask if all of us have become complacent; so many other disasters have occurred during the Biden administration that we may feel far removed from the prospect of a terrorist attack.

Let’s hope Joe Biden doesn’t get a horrific commemoration of September 11—one he will regret.

Let’s hope the homeland is safe.