Louisiana “boasts” one of the lowest vaccination rates in the country, and as a result, the latest Delta COVID surge is hitting the state harder than high-vaccination states. It’s quite clear from local hospital’s reporting on the surge who are seeing the brunt of the impact: the unvaccinated. According to the latest numbers released, 239 unvaccinated patients are hospitalized, compared to just 32 vaccinated.

The question for healthcare workers and policymakers is “How can we convince the reluctant to get vaccinated?” And the answer may be simply: Let the virus do its thing. Let the apprehensive see with their own eyes what happens when you choose to stay unvaccinated. Watch your neighbors spend twelve days on a ventilator (mine just did) and let word of mouth scare people out of their apprehensions and fears. According to a recent study, these are the most common reasons why Americans are staying unvaccinated: 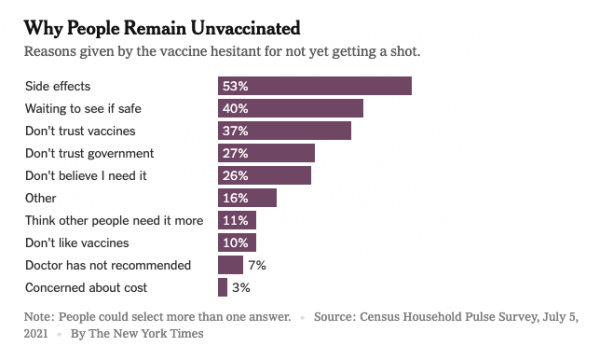 If you’re seeing dozens of your friends, colleagues, neighbors, and friends fall ill, most of the above reasoning falls to the wayside.

As I mentioned previously, I have a neighbor who recently spent weeks hospitalized, twelve days on a ventilator. We have several mutual friends in common who aren’t vaccinated. All of those individuals are now more concerned about getting sick than getting sick from the shot. They’re more concerned about what twelve days on a ventilator will do to them long-term than what the shot will do to them long-term.

This anecdotal hunch on a key driver of vaccination moving forward seems to be true in Louisiana, where it was reported last week,

On Monday, Louisiana reported one of its largest vaccination surges in months.

According to the Louisiana Department of Health, 84,271 additional doses of the vaccine were administered since Thursday. That’s even higher than last weekend, when the state reported 65,589 additional shots in an identical timeframe. Louisiana reported 56,110 doses over the weekend of Aug. 1.

About 61 percent of the shots given this past weekend were administered in people getting their first dose of the vaccine.

Across the country and the world, there are governments responding to any small or large COVID spike with increased lockdowns, mask mandates, and more. Recently in the New York Times, I wrote about why this is the wrong strategy in a post-vaccine world. But here’s another reason why mitigation efforts are the wrong call: Perhaps driving down the virus is also driving down the best motivator for vaccination.