Having cataloged and re-cataloged their stashes ten times over, and apparently lacking anything better to do, America’s archivists and librarians have found a new shiny bauble to be distracted by: combing through the accumulated detritus under their care in search of “offensive” or “harmful” language. The old card catalog in aisle 32B uses the term “colored person” rather than “person of color”? Say it isn’t so! Colonel Ellsworth Pratt of the 14th Battalion said something unkind about women in a letter to Lieutenant Roger Drake of the 15th Infantry Regiment? Oh, the horror! We must warn the poor dears! Amid the general wokification of 2020 and 2021, archives across the land quietly updated their websites with groveling “statements” apologizing for the sexism, racism, ableism, colonialism, trans erasure, xenophobia, queerphobia, fatphobia, islamophobia, arachnophobia, and sesquipedalophobia of their collections. “We must do better!” shriek the hostage statements in unison. It seems there isn’t an institution that hasn’t jumped on this bandwagon. Not even good-old Hoover:

Our collections deal in subjects that encompass a broad range of human experiences, including tyranny, genocide, displacement, and political conflict. To engage with our materials is to acknowledge that one may encounter content that reflects racism, antisemitism, xenophobia, homophobia, sexism, and other forms of hatred and discrimination. In keeping with our mission, we believe that only through the retention and study of historical sources can the world hope to learn from its past mistakes and promote peace.

“We strive to be aware of our own biases . . . and create new name authority records for people from underrepresented and marginalized communities,” promises the Hoover Institution. “Where we identify legacy descriptive content that is not fair, inclusive, accurate, or respectful, we seek to revise it with reparative description.” Reparative description! Isn’t that nice? (I wonder what Ricochet’s own Hooverites think of this.) But Hoover is just the tip of the iceberg. 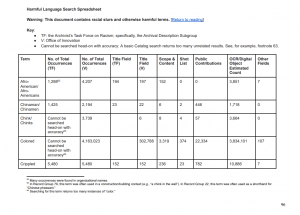 What would we do without archivists?

The National Archives and Records Administration (NARA), after releasing a report recommending that trigger warnings and woke propaganda be added to the Constitution and Declaration of Independence displays in the building’s rotunda, slapped a “Harmful Language Alert” at the top of its catalog page. Such “harmful” language includes words like crippled, handicapped, colored, Afro-American, disabled, elderly, squaw, and transsexual. Page 96 of NARA’s report even contains a handy chart showing how many tens of thousands of times such demonic incantations appear in its catalog. (Yes, the government paid someone to make this. How I miss the days of shrimp on a treadmill!)

I could go on. University libraries (no surprise there) seem especially prone to this particular form of madness. Emory University added a paragraph apologizing for “racist, ableist, sexist, homophobic, euphemistic [LOL!], and other oppressive language” to its finding aids (like this one). Yale convened a “Reparative Archival Description task force” to “remediate existing archival description and create anti-oppressive archival description in the future.” The Michigan History Center’s “about” page devotes more attention to George Floyd and the imperative of “dismantling” the “systems” of oppression than to its own history.

See, this is why parts of the right are losing faith in American institutions. In a serious society, serious people would run and visit the National Archives. But ours is not a serious society. It’s a society run by clowns and for clowns. A society in which words cause “harm” and sex is a mere construct. And while our enfeebled elites seize helplessly in the stacks (having been triggered by a run-in with a slur), the underclass drinks and drugs itself to death.

We’re bored, exhausted, and just waiting for someone to come along and put us out of our misery.