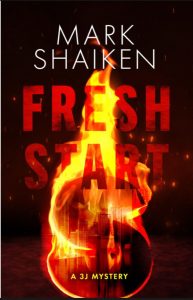 Many contemporary novels have been written about lawyers and the law.. Certain types of law lead to exciting drama, especially criminal cases. Bankruptcy law seems an unlikely source for gripping fiction.

“Fresh Start: A 3J Mystery,” by Mark Shaiken, is proof it can be done. It is tightly written, tautly paced, and absolutely absorbing.

Quincy Gunn Witherman builds and operates high-rise office buildings. His buildings are high-end, with 95 percent occupancy and blue-chip tenants. As with most developers, he is highly leveraged.  While his income is solid his properties dropped in value due to a general market downturn two years earlier. The market has stabilized and the buildings again appreciating.

His loan has a margin clause. Due to the downturn, he has been over this limit by $30 million for the last two years. His banks now see this as an opportunity to renegotiate Witherman’s loans at more favorable rates. They demand the full $30 million, in cash, within 30 days. They know Witherman lacks that much ready cash, and will have to go into default.

Witherman decides to shelter within Chapter 11 bankruptcy. He hires the Kansas City law firm of Greene Madison LLP. Specifically, he hires bankruptcy specialist Josephina Jillian Jones and her mentor and partner Bill Pascale.  3J, as everyone calls Jones, is among the best in the business.

The bankruptcy should go smoothly. The margin call was due to the lending banks playing hardball. They stand to lose more than they gained if they cannot negotiate a deal with Witherspoon. Worse, they could end up owning and operating Witherspoon’s buildings, the last thing they want.

There are two problems. The first is Witherspoon has hidden assets, undeclared during the bankruptcy filing. Among them is a secret Swiss bank account that has been in the Witherspoon family since the early nineteenth century. Witherspoon assumes it is untraceable.

The second problem is Stacy Milnes, the special assets collection officer for First Commercial Bank. Milnes is an Attila the Hen. She takes no prisoners, crushing anyone in her path, whether an ally or an opponent. She will go to any lengths to win, even if total victory costs more than a negotiated settlement. She is convinced Witherman is hiding assets and is willing to break laws to prove it.

“Fresh Start” is an exciting, entertaining novel; one proving even apparently dull legal areas can yield an energetic story.