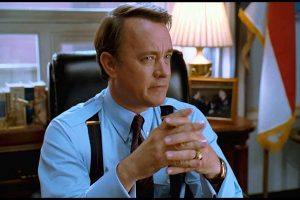 Since 1789, some 12, 420 Americans have served in the U.S. House of Representatives. I know of only three who have had full-length motion pictures made about them, and only one specifically related to his service in that chamber. Perhaps there are others: Davy Crockett (TN), Abraham Lincoln (IL), and Charlie Wilson (TX).

Books? Sure, lots of them, but no movies. US Senators haven’t fared much better, at least real ones. I’m sure my reader will correct me if I’ve missed anyone. I probably have.

“Charlie Wilson’s War” was a 2007 epic starring Tom Hanks in the lead role as US Rep. Charles Wilson (D-TX). The legendary Fess Parker famously portrayed Davy Crockett in a popular television series, and Billy Bob Thornton portrayed Crockett in 2004 in The Alamo. Fourteen actors have portrayed Abraham Lincoln, including the late Henry Fonda, Hal Holbrook, Jason Robards, Gregory Peck, and even Kris Kristofferson (who is very much still alive), but perhaps best by Daniel Day-Lewis in 2012.

How did Wilson, the Lufkin, Texas native and Naval Academy graduate who served in the US House from a rural southeastern Texas district from 1972 until late 1996 manage to get a movie featured about him? 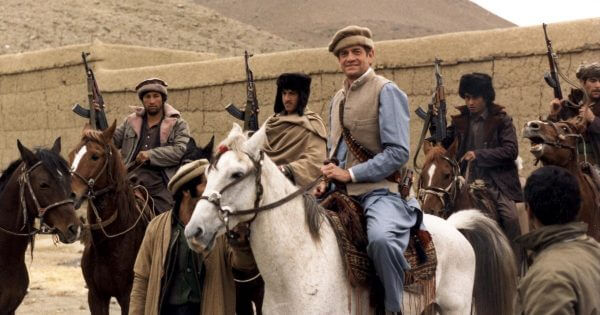 Charlie Wilson was the kind of congressional Democrat that doesn’t much exist today, protestations to the contrary aside. Sure, he was liberal on many social issues (pro-abortion, strongly pro Medicare, and consistently working to raise the minimum wage) and supported then-traditional Democratic constituencies, such as labor. He was also an American patriot. Having been raised during World War II, he became intensely interested in international issues with a strong anti-communist bent. And being from rural east Texas, he had a strong penchant for the underdog.

The Texas congressional district Wilson represented for much of his career bears no resemblance to the 2nd Congressional District that former Navy Seal, Republican, and US Rep. Dan Crenshaw represents today. Crenshaw’s 2nd District is suburban/urban Houston; Wilson’s 2nd District was deeply rural east Texas. But I think Wilson would have liked his successor and fellow Naval officer, Crenshaw.

Wilson also had a reputation. Young, single (well, mostly) male staffers enjoyed walking very slowly past his congressional office to catch a glimpse of the “jail bait” that comprised his rather attractive and almost entirely female staff. He earned the moniker, “Good Time Charlie.” For a reason. And he was proud of it. Watch the movie.

Charlie was a consummate transactional Democrat. He was asked by then-Speaker Thomas P. “Tip” O’Neill to serve on the House Ethics Committee to help protect O’Neill’s (and Wilson’s) friend Jack Murtha (D-PA), the defense appropriations chair who the late Ned Beatty portrayed in the movie. Wilson used his Ethics support for Murtha as leverage to secure a spot on the House Defense Appropriations Subcommittee. And there’s where Afghanistan comes into play.

In 1979, the Soviet Union dispatched 30,000 troops into Afghanistan in a brutal occupation. Let’s let James Phillips of the Heritage Foundation outline where things were by the end of that year:

“Almost one million Afghans have been killed, most of them civilians. Approximately five million Afghans, one-third of the prewar population have been driven into exile and now form the world’s single largest refugee group. Those that remain at home confront a Soviet army of occupation determined to terrorize Afghans into submission. Moscow has relied on scorched earth tactics to destroy food supplies, indiscriminate bombing of population centers illegal chemical weapons, mass executions, widespread torture, and boobytrapped toys designed to maim children steadily escalated Soviet military coercion, incurring mounting casualties, but has made little progress in consolidating its grip on Afghanistan or translating military superiority into political accommodation, let ‘alone support. Moscow also has made cosmetic changes in the quisling communist regime that it props up in Kabul in a vain effort to undermine the Mujahideen and defuse international criticism than it was in 1979 Since Soviet tanks rolled into Afghanistan on Yet the Afghan Mujahideen (H o ly Warriors) fight on.”

Emphasis was added but is not necessary.

The Soviets were (and, in my opinion, remain) nasty and evil. And that’s putting it nicely. President Jimmy Carter punished the Soviets for their invasion by withdrawing US participation from the Summer Olympics hosted by the USSR. Fortunately, the Soviets showed up at Lake Placid during the Winter Olympics that year. That worked out well. You know, the “Miracle on Ice.”

So what did Charlie Wilson do? He became a one-man band to help a small but determined band of “freedom fighters” in Afghanistan – the Mujahideen – fight the Soviet invaders. He initially procured some $40 million in aid, much in anti-aircraft missiles, to help arm and equip the Afghan resistance. More dollars would flow. Lots more. President Reagan was “all in.”

And it worked until the US failed to follow up after the Soviets left, as it almost always does (German Marshall Plan after WWII excepted).

Charlie Wilson didn’t do this alone. He had help from the Central Intelligence Agency in the form of Operation Cyclone. And fellow members of Congress.

In 1987, Rep. Wilson sent out a “Dear Colleague” to House members looking for those who would help connect hospitals in the United States with Mujahideen fighters who needed surgery for war wounds from the Soviets. I brought the request to the Arizona congressman I worked for at the time. He pounced, and quickly recruited hospitals in the Phoenix area where doctors were thrilled at the prospect of working on war injuries, something many had no previous experience at. Two of the injured fighters met with us in our Cannon House Office Building. It was a moving, unforgettable experience.

And we weren’t the only ones. I sometimes wonder what happened to these fighters. Especially whom they are fighting for – and against – now. Not sure I want to know.

So, how did the Mujahideen morph into the “Taliban?” That’s not entirely what happened, but I’ll let the BBC (British Broadcasting Corporation) try to summarize it. It’s complicated.

The Taliban, or “students” in the Pashto language, emerged in the early 1990s in northern Pakistan following the withdrawal of Soviet troops from Afghanistan. It is believed that the predominantly Pashtun movement first appeared in religious seminaries – mostly paid for by money from Saudi Arabia – which preached a hardline form of Sunni Islam.

The promise made by the Taliban – in Pashtun areas straddling Pakistan and Afghanistan – was to restore peace and security and enforce their own austere version of Sharia, or Islamic law, once in power.

From south-western Afghanistan, the Taliban quickly extended their influence. In September 1995 they captured the province of Herat, bordering Iran, and exactly one year later they captured the Afghan capital, Kabul, overthrowing the regime of President Burhanuddin Rabbani – one of the founding fathers of the Afghan mujahideen that resisted the Soviet occupation. By 1998, the Taliban were in control of almost 90% of Afghanistan.

Afghans, weary of the mujahideen’s excesses and infighting after the Soviets were driven out, generally welcomed the Taliban when they first appeared on the scene. Their early popularity was largely due to their success in stamping out corruption, curbing lawlessness and making the roads and the areas under their control safe for commerce to flourish.

As I said, it’s complicated.

The Taliban and its extreme form of religion are extreme misogynists. It’s anti-LGBT. It imposes the strictest form of Sharia law imaginable. And it cooperated, assisted, and hosted Osama bin Laden and Al Queda for many years, serving as a launching pad for terrorist attacks against Americans, including what happened on 9/11. One wonders how terrorism will return to the United States once they’re in control, again, of the entire country. Are you paying attention to our open southern border?

Much is being made of all the benefits to Afghan society from 20 years of a small number of US troops – mostly around 2,500 – keeping Taliban extremists at bay to help them build their society. Let’s consult GatestoneInstitute.org:

“The biggest catastrophe is that Afghanistan will become the capital of terrorism again, and now we have the threat of Al-Qaeda making a comeback… after America’s withdrawal from Afghanistan as these groups feel proud and victorious, which will push them to continue fighting against America and the Arabs and Europeans.” — Mounir Adib, Annaharar.com, June 5, 2021.

Joe Biden and his Democratic sycophants are “crediting” Donald Trump and using him to justify their “bipartisan” decision to withdraw AND provide no air support to Afghan government forces. That’s false. No one believes for a second that Trump would have done nothing to support Afghan’s military while withdrawing US forces. Meanwhile, Biden is sending 3,000 troops – more than we have had stationed (2,500) in recent years – to facilitate withdrawal. Look for a scene like this soon, from the 1975 embassy rooftop escape from Saigon. Seriously, if the media does its job (jury out on that, and not holding my breath):

So, what happens now?

Time will tell, but let’s let GatestoneInstitute.Org lay it out. I can’t say it better:

As the United States prepares to complete its withdrawal from Afghanistan by August 31, 2021, a growing number of Arabs are worried that the American move will not only bring the Taliban back to power there, but also lead to the re-emergence of other Islamist terrorist groups such as Al-Qaeda and Islamic State (ISIS).

The Arabs are saying that the Americans are mistaken if they think that the war on terrorism will end with the withdrawal of the US troops from Afghanistan.

They are warning the US that it will pay a heavy price for allowing Afghanistan to fall into the hands of terrorist groups. They are also saying that they see no difference between the Taliban, Al-Qaeda and ISIS, and how these groups openly cooperate with each other.

So, you may not care about Afghanistan. Maybe you didn’t have a son, a daughter, a father, or a mother who fought or died there. But you did see what terrorism hosted and sponsored there did on September 11, 2001. After all, Barack Obama called Afghanistan the “good war” and Iraq the “bad war.” How has that worked out?

“Those who fail to learn from history are doomed to repeat it,” Winston Churchill said. We are, in many respects, repeating the mistakes of the Vietnam War, the other war we lost in the past century. Read a book authored by my friend, noted military historian Dr. William Hamilton, “War During Peace,” for the lessons that our military and political leaders can’t seem, or refuse, to learn.

Meanwhile, I think Charlie Wilson is happy with his legacy.