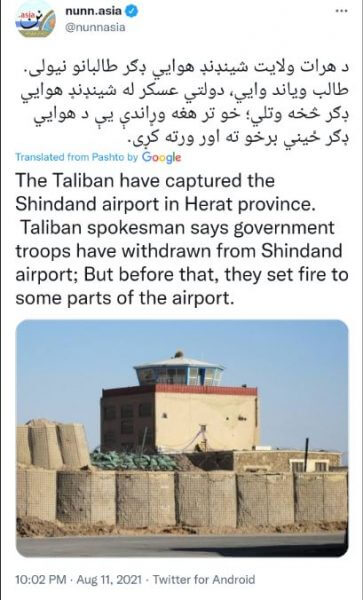 It was confirmed Wednesday night that Shindand Airbase fell to the Taliban. The news of this, while not unexpected, hurts. It hurts my soul. It hurts the way the passing of a loved one does after years of illnesses. You go from thinking about how you will react, to reacting. From wondering how you will mourn, to mourning.

I won’t say I’ll mourn for Shindand. I hated the place too much when I was there to ever do that.

Shindand is due south of the historically and strategically important city of Herat in Western Afghanistan. In 2009 I was one of the first Americans, who wasn’t a green beret, sent to Shindand as part of President Obama’s “surge.” The Italians had been in charge of that part of Afghanistan since the now temporary fall of the Taliban, and the invocation of NATO’s Article 5. In 2009 I was an Aviation Ops Specialist for a MEDEVAC unit that pushed out to the western high-altitude desert to support the Marines pouring into Herat, and some 82 Airborne units pushing north to the Turkmen border. The only Americans who were there before us were some Special Forces teams and the Seabees. The latter were turning a dilapidated Soviet airfield into a major airbase. Our two Blackhawks were the first American aircraft to stay there overnight, and at first we had to park them in the SF guys’ area, because there was no security anywhere else on the base.

The early days were rough. We were short of pretty much everything, but what I remember most was the toilet paper shortage. We actually saved and used TP from our MREs! We saved every scrap of paper we could. Just in case you needed to go, and it came to that. But being away from the “flag pole” was also a lot of fun. The Italians had the best food I had during my deployment, and every now and then you could sneak a little box of wine out of their dining hall. The wine came in little cartons that looked like a Hi-C and didn’t taste much better. Our NATO allies would join us in Afghanistan, but they wouldn’t give up wine with their meals. American troops were not allowed alcohol, to show respect to the local culture and win “hearts and minds.” The droll and cynical responses to this policy are so obvious I won’t even waste your time with them.

The Seabees finished up the airfield and our whole aviation battalion followed us to Shindand. We moved into the airport building pictured above. I never found out, but I assume it was built by the Soviets. I spent Thanksgiving and Christmas in Shindand. The Italians sounded like they got very drunk on Christmas Eve, we all remained sober. Just before I got sent to another base in an even more remote corner of Afghanistan, a priest came out from Kandahar and said Ash Wednesday mass for the Catholics. Every Catholic in the Battalion went to get their ashes. Afterward, one irascible captain yelled at a poor private who pointed out to him that he had something on his forehead.

Near our battalion area, close enough to walk, but far too dangerous to do so because of mines and unexploded ordinance, was a scrap heap of Soviet materiel; jets, helicopters old trucks, etc.. I started calling Afghanistan the landfill of history, and I didn’t mean that as an insult. The bits and pieces of history somehow make their way to Afghanistan, and the Afghanis preserve them in their poverty. In Kandahar, I saw them selling old Russian money, not Soviet money, but Imperial Russian money, and these sat next to rupees from the British Raj. Leftovers from the Great Game. While looking for old Soviet bric-a-brac I found a Maria Theresa Thaler, according to Wikipedia this might be a counterfeit made by the OSS for resistance fighters during WWII. Like I say, the landfill of history.

And now all the hard work that was done by me, my Medevac company, my battalion, the Seabees and everyone after us will add to that landfill. No, I won’t mourn Shindand, but something was definitely lost yesterday.