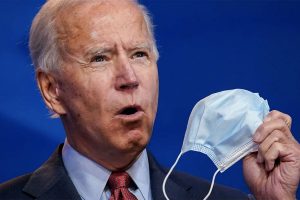 Even by Biden standards, that was a deceitful remark. Not only did his opponent spearhead the unexpectedly efficient development of the Covid vaccine, which has been the cornerstone of pandemic suppression ever since, but the Biden administration has already done the most damage of any in memory by politicizing “the Science,” thus weakening its credibility.

Real science isn’t some facts approved by experts but a philosophical framework for acquiring and evaluating knowledge that originated in the Enlightenment. Science emphasizes reason, observation, and methodical analysis rather than loyalty to the teachings of authorities.

But “the science” is also an institution, the mainstream scientific establishment. It has value as a keeper of standards and liaison to the masses.

Like all humans, scientists can become absorbed in self-interest and groupthink. Real science has recently been threatened by a return to dogma science, the veneration of experts, and the belief that if a consensus of scientists believes something, that makes it true.

Science history shows the tragic consequences when dissent is disallowed. Galileo in the 16th century was censured and tormented for defying the teaching of Ptolemy that the sun was the center of the universe. Millions of humans suffered needlessly for millennia because medical practice was based on the ancient teachings of Galen, while new observations and innovations were prohibited.

In spite of all the technical achievements and enhanced prestige of science, the struggle between open inquiry versus dogma-as-science is still with us. For those with trouble distinguishing the two, here’s a tip. Real science welcomes dissent, considering it essential to the advancement of knowledge. Dogma science resents noncompliance and tries to eliminate it.

Yet scientific conformity, the enemy of progress, is once again achieving widespread approval. We’re told that 97% of all climate scientists believe in global warming, which is code for: human activity is hurtling us toward a climate catastrophe that can only be avoided by radical changes in human behavior and consumption.

Although the scientific community has closed ranks around this view, many points remain debatable. Some unafraid scientists question the reliability of the models and/or the accuracy of underlying data. Others also question the feasibility of decarbonization when the world’s major polluters show zero interest in compliance and citizens’ movements worldwide already resist even modest sacrifices to avoid the threatened calamity.

But the alarmists arguing the necessity of a dystopian world of deprivation and oppression aren’t brooking any second thoughts. Those who have them are branded “deniers,” morally equivalent to Holocaust deniers. They are silenced and fired and scorned.

Non-standard opinions are branded as “misinformation” and banished. When over 95% of federal climate research funding goes to committed climate alarmists, working scientists get the message.

Much of the dysfunction is recent. British science writer Matt Ridley remembers how “20 or 30 years ago, you could study how the ice ages happened and discuss competing theories” without fear of reprisal. No longer.

The science of coronavirus disease too has become so politically charged that rational discussion is no longer possible. Remember that not long ago, Biden and Harris, our two top “science followers,” vowed to refuse the Covid vaccination if Trump was involved.

Those who disagree with the government/consensus line on early-stage medical management, the value of lockdowns, the necessity of school closures, or the need for masks are abruptly canceled. The scientific community was so anxious to make us believe that there was no possibility the virus could have originated in a Chinese lab that the notion was designated as “misinformation” until dogged investigation revealed otherwise. Oops.

Today, social media, in collaboration with the government, perform the work that was once the mission of the Inquisition: identifying heretics and punishing them. The common man is in a quandary. With so many people in white coats lending their credibility to the political domain, how can you know the truth?

There are real-world consequences to this intellectual chicanery. The distrust engendered has contributed to public skepticism over needed technologies like genetically modified food, nuclear power, and – yes – vaccines.

Galileo could have warned us.