Have you noticed how the word choice and hyperbole of the Left has ramped up since the January 6 incident? And have you noticed how weak the protest has been from the Republicans to refuse to accept language like “insurrection” and “coup”? I don’t 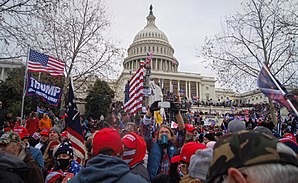 know about you, but I feel deeply the dangers of this language, and I predict that not only will it worsen and intensify, but we are all personally going to be vulnerable to these attacks and the actions that may follow them.

Sen. Chuck Schumer established the lexicon to describe this event:

On 6 January, presumptive Senate Majority Leader Chuck Schumer called the Capitol protesters ‘rioters and insurrectionists, goons and thugs, domestic terrorists.’ The US left-leaning mainstream media echoes the narrative, running stories claiming that the president was up to nothing short of a coup and that he ‘should be criminally indicted for inciting insurrection.’

For this discussion (at least initially) I’m not going to talk about President Trump’s role in this event, except to establish my basic beliefs: He didn’t intend to incite violence; a small group of protestors got carried away and others were drawn into the drama; there was no intention to incite an insurrection, nor take over the government. You are free to disagree, but I think it’s more valuable to look at the hyperbole used by the Left and the reason it is so threatening to our country, although the language is intended, in part to shame and discredit Trump. Professor Joseph Siracusa, a US politics expert from Curtin University, Australia made the following comments:

But there’s much more going on here than destroying Trump’s future. One writer stated the following regarding the goals of the Left:

What they are doing is methodically intentional, and the reason is crystal clear. They want to paint a dark, ominous picture of the American political landscape, one that firmly places anyone who questioned the 2020 election or even supported former President Donald Trump as not just political adversaries, but enemies and even outlaws who want to overthrow a democratically elected government.

It’s worth noting that where the most extreme language used against the Right in the past were words like Nazi and evil—words that describe ideas and philosophies—but now we are hearing words like insurrectionists, coup, outlaws and thugs—words that are identified with brutality and violent action. We are no longer simply nasty people; we are literally a physical threat to the country and to democracy.

The same writer points out his concerns for this rhetoric:

If they can paint the right as insurrectionists and coup plotters, they can then justify any method to stop and/or punish the insurrection and coup plotting. If you think they’d never do it, consider all the ways the world has changed because of a virus with a 99.87% survival rate. This is why it’s so important to push back against that narrative. Indeed, what happened that day was stupid, tragic, and completely unnecessary, but it was NOT an insurrection, nor was it a coup attempt. It wasn’t even close.

The media made a half-hearted and feeble effort to explain how their language escalated in their description of January 6. And then there was this comment from the AP:

News organizations have been careful not to use words like rebellion, revolt or uprising, which could cast those who stormed the Capitol in a heroic light, he said.

In its coverage, the Times has called it a ‘mob attack,’ ‘deadly riot’ and ‘violent assault,’ and said Trump supporters ‘laid siege’ to the Capitol. The Post has talked of a ‘horde of rioters’ and ‘terrifying attack.’

Seriously? Are none of these descriptions “overstated”? Does Mr. Tompkins think that the “attack” was so horrendous that there is no way to exaggerate what happened or its implications?

Then NPR provided an assessment of their coverage:

At 3:44 p.m., Managing Editor for Enterprise and Planning Gerry Holmes issued a newsroom-wide directive to call them ‘pro-Trump extremists’ not ‘domestic terrorists.’ This was the first decision that steered the language away from ‘protest.’ A half-hour later, he expanded that language to authorize the use of ‘mob’ and ‘insurrection. Two hours later, ‘rioters’ was added to the list.

I wonder what Mr. Holmes learned in a one-half hour that justified his insisting the protestors be called extremists and not terrorists, to deciding that the appropriate language was “mob” or “insurrection.”

He didn’t. He probably was following the Leftists and the rest of the media to figure out how extreme he could be. He discovered that he could call the event just about anything that he wished.

So what can we learn from all this word-smithing and hyperbole? First, it’s clear that once the media and legislators mostly agreed among themselves that they could use extreme language, they did just that. In part, it was an attack on President Trump. But more than that, they wanted to make sure that Trump’s followers—in fact, anyone on the political Right–would be tarred with the ugliest, violent, and dangerous descriptors possible. We are all dangerous—guilt by association. We all have the potential of being thrown in jail, just like those who were arrested on January 6, and were held indefinitely. Not only our words will make us vulnerable, but our “reputations” as insurrectionists and leaders of coups.

And what are the Republicans doing? They chose to vote for awarding the Capitol Police medals for their response to January 6, in a bill that included the “insurrection language.” Few people refused to vote against the bill:

Texas Rep. Louie Gohmert said he opposed the bill because it mentioned ‘armed insurrectionists,’ although the legislation itself made no mention of ‘armed’ rioters.

‘I was concerned about language preceding the honoring of the Capitol Police because some of it was neither true nor accurate, including saying we had an armed insurrection,’ Gohmert said. ‘Because we found out, no one that came in the Capitol was armed. So rather than having false information being voted for, I preferred to have a build [sic] that honored the Capitol Police without having false statements in it. That’s why I took that out and honored the police.’

I’m glad the Capitol Police stepped in, in spite of being ill-informed in advance about the potential dangers of stepping in. But I have one question for the Republicans who voted for the medals bill and kept silent—

Who will protect the nation, when the Left finally decides the next time there’s a crisis, to call those on the Right insurrectionists?

What will you do then?