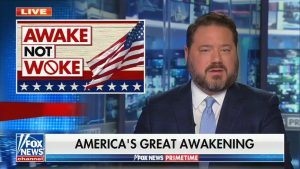 “History doesn’t repeat itself, but it does rhyme.” Mark Twain

For a few cynical wags and critics, Ben Domenech is best known as former “The View” co-host Meghan McCain’s husband. But that is unfair. The soft-spoken, cerebral, and calm Domenech is a celebrated writer and editor in his own right, and as of late, an occasional weekly host on Fox News “Primetime,” including this past week.

Domenech’s day job is serving as publisher of a popular and highly-respected libertarian-conservative website, TheFederalist.com, which features a stable of outstanding fellow journalists, including the estimable Mollie Hemingway. He also authors his own daily newsletter, The Transom, to which I subscribe for the bargain price of $30 annually. He publishes almost every day; it is part of my morning routine.

Since I do not regularly watch Fox News Primetime, I’ve missed Domenech’s opening monologues for the hour-long program that precedes Tucker Carlson. Fortunately, Domenech has been posting his terrific monologues via his newsletter.

And this week, he’s started with a historical reference and theme – the “Wide Awakes” – the Hell’s Angels of 1860. 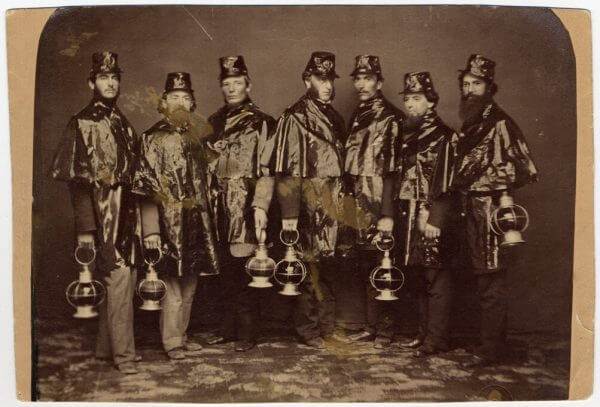 Historian Jonathan Grinspan best tells the story of the Wide Awakes of 1860 and how they came to be so named.

A band of “sleepy Gotham politicians” gathered in a Manhattan tavern late one evening in 1860. It was a windy Thursday night, and the atmosphere inside the dimly lit establishment was subdued. The bosses ordered ale and settled into a lazy debate about the usual political topics. They cursed the Republican party, analyzed their presidential ticket, and worried about the possibility of secession, all while getting steadily drunker in the cozy tavern.

They first heard the noise around midnight. From uptown came the clash of a marching band followed by the advancing tread of hundreds of boots on the cobblestones of the Bowery. Soon the stench of burning oil filled their nostrils, and the tavern’s dark windows began to glow from the outside. Tipsy and curious, the insiders spilled out onto the street to join a throng of dazed New Yorkers. There they watched as large formations of young men, clad in shimmering black capes and soldiers’ caps, came stomping down the middle of their island. Each bore a blazing torch, and none said a word. Pushing through the crowd, the sobered politicians shouted, “Who are these Wide Awakes?”

You may not know about The Wide Awakes, but you should. There were hundreds of thousands of them in 1860, and their organizations stretched from Maine to California. They were a militaristic fraternity dedicated to human liberty. They had banners and marches and baseball teams, they carried oil lamps, wore capes, and wielded bats. And they stumped for a rising Republican railsplitter named Abraham Lincoln.

The Wide Awakes were working class populists — mostly young men with no real power or wealth. Party bosses and political elites looked down on them, as they did Lincoln. Grinspan noted that “Some Republican leaders even complained about the absence of ‘the intelligent classes’ in the Wide Awake ranks, which they claimed were made up of ‘the mechanic, or laborer, or clerk.'”

And yet, he also writes, “Many of the movement’s supporters—and even some of its vociferous opponents—believed “there never was, in this country, a more effective campaign organization than the Wide Awakes.” They were everywhere – at the massive rallies that supported Lincoln, acting as security to prevent the harassment of pro-liberty speakers across the country. Everyone knew their symbol: a giant eye, opened to see the truth.

Domenech contrasts the Wide Awakes of 161 years ago to the “woke” of today, who ironically are focused on keeping you asleep from the reality of “what’s going on around you.” And he hopes, as I do, that you do not miss the irony of the Wide Awakes also being disdained and looked down on by the elites of the day. It is also a helpful contrast to the “woke,” symbolized by “fragile” white liberals and militarized by Antifa and Black Lives Matter, among others.

Domenech’s monologues have been more than a comparison and contrast between “woke” and the “awake” Americans of today, but a call to action.

The Wide Awakes campaigned for “Free speech. Free soil. Free men.” And they won. But it took the courage to stand up, to organize, to take to the streets and take a stand.

There is nothing new under the sun. Today, once again, the woke want you asleep. Locked down. Docile. Tamed. Subdued. They want you to turn away from the truth and embrace a comforting collection of lies.

It reminds me of defeated, hang-dog conservatives who believe all is lost, that it is too late to turn back. I strongly disagree; American history is replete with challenges more severe than this, including what happened after that 1860 election. We have always recovered from such crises, sometimes stronger than ever, until. . . the next crisis. Domenech’s monologue is welcome, but is also reminiscent of what Christian theologian Doug Wilson refers to as “the coming preference cascade.” I’ll let Wilson describe what that means.

A preference cascade occurs when numerous individuals, around the same time, realize that they are not “the only one” who thinks the way they do. Before the moment arrives there is an established orthodoxy which remains unquestioned in the official spaces, but as people are left alone with their own thoughts, they find themselves thinking in various heterodox ways. And then, one day it happens. Numerous individuals discover, all at once they discover, that many others believe that the reigning acceptableness is . . . unacceptable.

I doubt “awake” Americans will start donning military-style uniforms and wield torches silently during midnight marches through urban enclaves. Thoughts of Charlottesville in 2017 would come to mind, even though there is no evidence that the Wide Awakes of 1860 were violent. They did accompany and protect their favored political candidates, including . . . Abraham Lincoln.

When does the “preference cascade” make its presence known? More from Wilson:

Let me ask you a question. Just last week, what did our medical authorities do? Why, the AMA called for biological sex to be removed from all birth certificates. What did our athletic authorities do? They let a dude compete in the women’s Olympic weightlifting competition. What did the governor of New York do? After having chased thousands of businesses out of his state, he publicly chided them. You see, if they don’t come back, then New York will suffer. That is like an abusive boyfriend telling his ex that if she doesn’t move back in, he will be sad. Because he doesn’t have anybody to punch anymore.

When the authorities abandon wisdom, and please follow me closely here, wisdom abandons them. And when wisdom abandons them, the public starts to notice. I do acknowledge that there can be something of a time lag, as the moral capital of previous generations of leaders is not entirely used up. But then, when it hits, it hits.

And yes, there was an amusing attempt to appropriate the “Wide Awakes” in 2020 that bore no resemblance to the original by a Brooklyn rapper and local art community. Their statement of purpose is a puzzling word salad. It was more known for being anti-Trump and pro-AOC and selling colorful wares. Fortunately, they seem to have faded with the election, despite some fawning media from the usual suspects. Domenech wisely didn’t mention them.

But Domenech’s characterization of the “woke” versus the “awake,” which is not original to him, is apt. Perhaps it will help what author Kurt Schlicher refers to as “normals” or “normies” – regular Americans who are distracted by their regular lives – realize that our bungling authorities are finally going too far. And it is almost time for the “preference cascade” wave to smash the beaches. I’ll let Domenech conclude this post with part of his Tuesday monologue.

You are supposed to be comfortable with the government the elites give you, which will use emergency powers to keep you masked up, locked down, and prevent you from buying seeds… but will do nothing to stop the cartel-benefiting anarchy at the border.

Just as the elites feared and hated the Wide Awakes of the 1860s, so their ideological descendants fear and hate the wide-awake Americans of the 2020s. Make no mistake, the progressive left today is the inheritor and continuance of the slave power of yesterday.