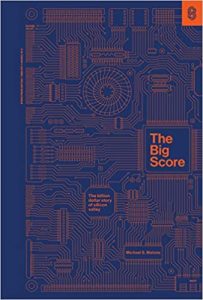 I finished my first book in the first few days of 1984.  The experience had been a nightmare.  Not really knowing the process or the pace, I had spent months of near-all-nighters writing a book on the history of Silicon Valley that was 300,000 words long — three times the contracted amount.  I had slept on the office floor many nights, and once I got drunk after having accidentally/ erased 10,000 words.

I sent the manuscript to Doubleday in one of the first attempts to do so over the Internet — on a 3K modem (it took about 12 hours)  I had $12 in the world. So my soon-to-be-wife and I celebrated with a half-dozen sliders and a bottle of Bushmill’s my parents had brought back for me from Europe.  The next day, I collapsed and got violently sick. . . completely missed my 30th birthday.

Then, to add insult to injury I had to edit  (i.e., take a meat ax to) the bloated manuscript — on our honeymoon.  We ate our meals on a camp stove we had sneaked into our hotel room.

The Big Score was published in early 1985.  By then, everyone I’d ever worked with at Doubleday had quit.  Thus, the book was born an orphan with all but no marketing support.  It got a few good reviews and a few less-enthusiastic ones.  To make matters worse, Doubleday was so broke that the finished product had both a cheesy cover and the binding started falling apart on the day the first copies arrived at my house.

Sales were so tiny that they barely covered the equally tiny advance Doubleday had given me.  I computed that I would have made more money during those months putting on a paper hat and working the drive-thru window at McDonald’s.  So I had no time to celebrate but had to get back to looking for freelance work.

Still, I believed in my first book.  During all of those long months of writing, I had kept going by telling myself that I was creating something important and enduring.  And now, six months after the book had been published, as I began to see it on remainder shelves in Silicon Valley bookstores, I began to have doubts.  Worse, a few books showed up on eBay bearing a dedication I had written to someone to whom I had given a free copy.

I went on to write other books over the years that followed — I’m now up to two dozen books I’ve authored, co-authored, or are collections of my magazine and TV work.  Several have been best-sellers, and a couple have even won Best Business Book of the Year awards.  A magazine even called one of my books “the best business biography ever written.”

But none have ever had the importance to me of that first book.  I suppose that’s true for most authors.  After all, it’s your baby; the one that you filled with all of your naive hopes and youthful dreams.

About the time Doubleday took The Big Score out of print and sent me a couple of boxes of moldering leftover inventory, something odd happened.  My forgotten out-of-print little book began to be called, to my amazement (and frustration) a “classic” history.  The price of used copies in good condition briefly climbed into the hundreds of dollars.  I told my wife that if those prices kept climbing we could sell all our of old copies to pay for the kids’ education.

Then, last November, I received an email from Stripe Press, a specialty publishing program set up by the founders of the multi-billion dollar Internet infrastructure company, Stripe Inc.  It seemed that Stripe Press had been creating a library of business and economic books by reprinting acknowledged classics in those field, taking out-of-print works from the last half-century or more and republishing them in beautiful bindings and quality paper — and then made them available to the discerning public.

Needless to say, I was stunned.  All that Stripe asked was that I write a new introduction (apparently a rare thing, as most of the previous authors of their books were deceased) explaining my experience in writing the book, and what I got right and wrong.  Writing that intro proved to be one of my favorite writing experiences ever — even though I had to admit publicly that I gotten the potential of the Internet completely wrong.

The new edition of The Big Score came out a couple of weeks ago.  Sometimes I open my copy and, ignoring the messy prose, just feel the creamy white pages and feel a sense of vindication.  I’ve been doing interviews and global Zoom talks in the day’s sense.  And, incredibly, the new edition even made number one in three categories on amazon.com.

After forty years, against all odds, it looks that my little book was everything I thought it was way back then.  I can now say, at last, that it was worth it.