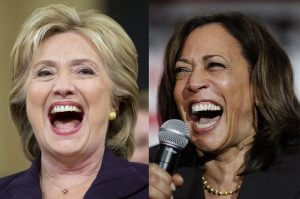 A group of the Democratic Party’s most influential women met for dinner at a home in the nation’s capital last month to game out how to defend Vice President Kamala Harris and her chief of staff, Tina Flournoy, against a torrent of bad press.

..The host was Kiki McLean, a Democratic public affairs expert and former adviser to both Clintons.

“Many of us lived through the Clinton campaign, and want to help curb some of the gendered dynamics in press coverage that impacted HRC,” this source said. “It was like: ‘We’ve seen this before.’ It’s subtle. But when things aren’t going well for a male politician, we ask very different questions, and they’re not held to account the way a woman leader is.”

You know, to just be grossly generalistic, you could put half of Kamala’s critics into what I call the basket of deplorables. But what difference, at this point, does it make? I think her new PR team will easily wipe away all the bad coverage, like with a cloth or something.