A few years ago, I read Stephen Ambrose’s book Undaunted Courage about the Lewis and Clark expedition. I was enthralled, and couldn’t put it down. In fact, the book gave me an idea for a children’s book that I am considering writing.

This afternoon, Ray and I were in our local Barnes and Noble in the History section, and I saw that book on the shelf. It had a very unusual sign on the shelf underneath it, and it just made me stop and look. What do you think of this? 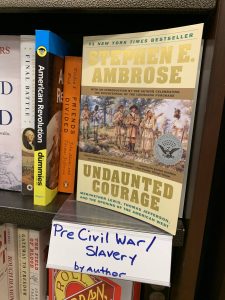 I always thought the book was about Lewis and Clark, and Jefferson. I’m betting the store employee who made that shelf tag was under 30 years old. Sigh…