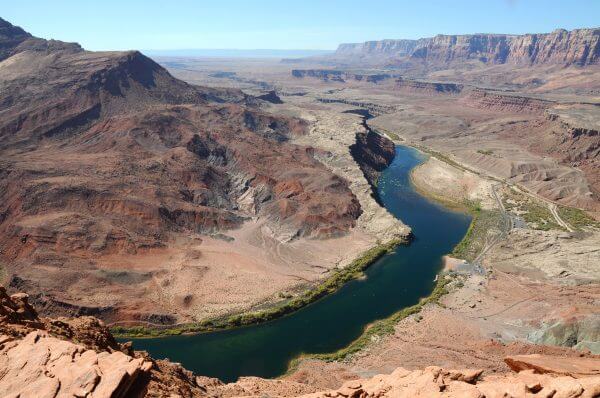 As the American southwest began to be explored and settled in the mid-19th century, Lee’s Ferry became a transportation hub of sorts, the spot where the Colorado River could be forded. The area is named for John Doyle Lee, who set up a ferry operation at the site in 1873. Lee, who was born in 1812, joined the Church of Jesus Christ of Latter-Day Saints at the age of 26 in 1838 and was adopted as a son by Brigham Young and was a practicing polygamist with 19 wives and 56 children. By the time he started his ferry operation, he’d led quite a varied life including missionary work, farming, working as an Indian Agent for the United States, and serving in the Utah Territorial Legislature. Oh, and he had also taken part in a cold-blooded mass murder – the Mountain Meadows Massacre. 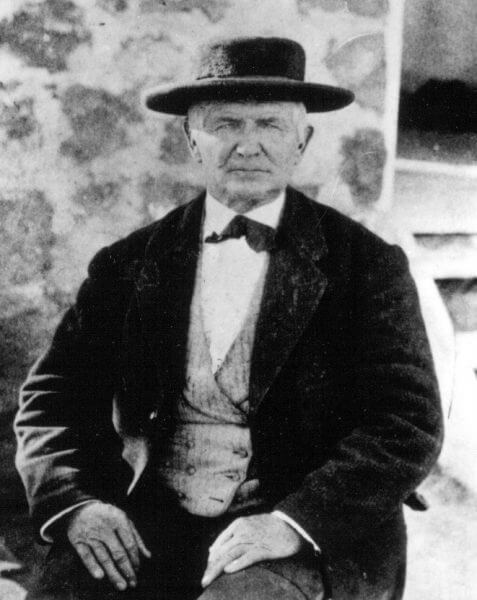 In September 1857, a group of Mormon Militia along with some local Southern Paiute Native Americans attacked and laid siege to a party of emigrants from Arkansas (the Baker-Fancher party) on their way to California. The Mormon Militia, who were dressed in Indian garb, had somehow talked the Paiute into joining the raiding party in the hopes that the attack could be blamed on an Indian raid. After the initial attack, a siege ensued for the next five days by which time the emigrants had run out of food, water, and ammunition. At this point, under a flag of truce the militiamen offered the emigrants safe passage from the Indians back to the nearest town which was accepted. However, shortly after starting out towards town the militia proceeded to slaughter the emigrant party sparing only 17 children deemed too young to be reliable witnesses to the killings. The exact number killed remains unknown with totals ranging from 100 to 150 or so.

The reasons and responsibility for the massacre are still the subject of dispute and discussion. The army began an investigation in the immediate aftermath and the incident was national news with many national periodicals, such as Harper’s, covering it. The investigation, however, got deferred, first by the Utah War and then by the Civil War. In 1874, Lee, who was a major in the Utah Territorial Militia, was arrested for his role in the massacre. He went to trial twice surviving a hung jury in 1875 before being convicted in a second trial in 1876. He was executed by firing squad on March 23, 1877. Although seven or eight other militia members were indicted at one point or another for their roles in the massacre, Lee would be the only person associated with mass murder to be convicted. 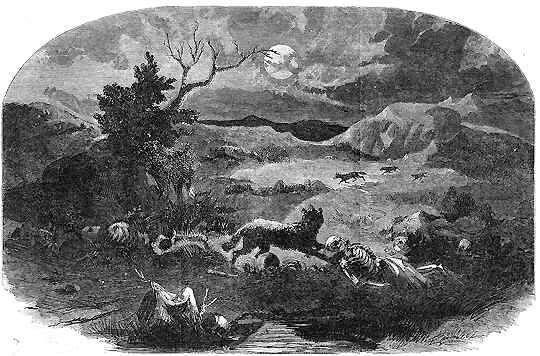 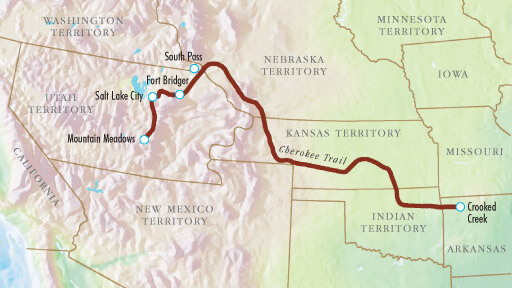 Route of the Baker-Fancher Party 1857

Getting back to Lee’s Ferry itself, Lee’s seventeenth wife, Emma, continued to run the ferry in his absence before selling it to the LDS Church in 1879. Lee’s Ferry would retain its important role as a Colorado River crossing venue well into the twentieth century. The ferry was made obsolete when the Navajo Bridge, located several miles downstream in Marble Canyon opened to traffic in 1929. Today, Lee’s Ferry has a campground and boat launching ramp.

Lee’s Ferry had one more important role to play in the Colorado’s history. As the twentieth century rolled around it became more and more obvious with each passing year the feral river would eventually have to come under man’s control. The first evidence of this came when the developers of Imperial Valley, an arid, desert region located in the southeast corner of California tapped into the Colorado River for the irrigation water that would be necessary to create their desert oasis. In 1905, an ill-conceived river turnout failed during a high river stage resulting in flooding throughout the valley with extensive soil erosion and a refilling of the Salton Sea to a depth of 73 feet. It took the better part of two years and 2 million dollars before the Southern Pacific Railroad was finally able to permanently close the breach. 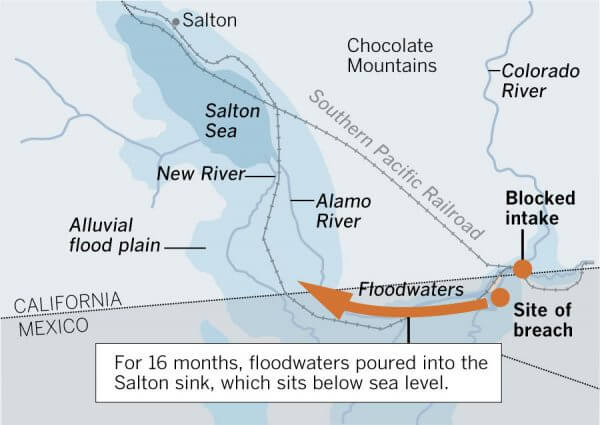 At the same time, Imperial Valley farmers were petitioning the recently created United States Reclamation Service to provide a more permanent and secure system to divert Colorado River water, the biggest problem being that portions of their canal system were in Mexico and thus subject to shutoff or diversion by Mexico, while the other major problem was the continual silting up of the canal system. This provided the impetus for the Reclamation Service (they would change their name to Bureau of Reclamation in 1923) to undertake a detailed and thorough study of the entire Colorado River watershed under the leadership of Director Arthur Powell Davis. 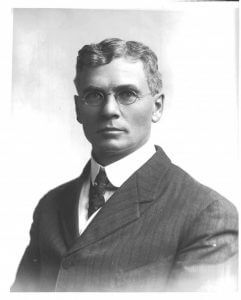 When the city of Los Angeles began making noises about accessing Colorado River water and the Reclamation Service issued a report (the Fall-Davis Report) proposing a high dam in or near Boulder Canyon to serve as both a flood control facility and a source of electrical power, it was necessary for the seven states within the Colorado River watershed (Wyoming, Colorado, Utah, New Mexico, Arizona, Nevada & California) to get together and try to work out an equitable allocation of the river’s waters. The states other than California were worried and alarmed that California, through the doctrine of prior appropriation, which was the legal doctrine in the western U. S. would gobble up the lion’s share of the river’s water before they had the population and resources to develop the river for their needs in their states. This can clearly be seen when looking at each state’s population in the 1920 census.

A commission, The Colorado River Commission, was put in place with the goal of reaching a compact among these states which would allow the development of the river to commence in a manner that was fair to each state and would avoid both costly litigation and uncertainty. The commission was chaired by Secretary of Commerce Herbert Hoover and the first meeting was held in Washington, D. C. in January 1922. A series of meetings, open to the public, were held in each state over the next six months but little to no progress had been made in resolving any of the issues that needed resolution before a compact could be put in place. Several things happened at this time to shake things up. First, the Supreme Court handed down a ruling in a case involving a stream passing through more than one state (Wyoming v Colorado re: Laramie River 1922) which called for the use of prior appropriation doctrine in resolving these disputes. All immediately realized that this decision put California in the driver’s seat in the negotiations. Second, Hoover recognized a couple of problems with how the Commission was pursuing things. These were: 1) the open meetings were counter-productive as the representatives of each state would not concede the most basic points in an open setting, and 2) a division of the river into lower and upper basins could allow the states in each basin to agree on water rights within each basin at which time the overall agreement could potentially be reached since each basin had already been decided.

With this in mind, Hoover set up a meeting at a remote ranch in New Mexico a couple of hours by automobile away from Santa Fe. At this meeting, each state was allowed only a political representative assisted by one legal expert and one engineering expert. His suggestion of dividing the river into a lower and upper basin with the division being at Lee’s Ferry was agreed to. Each basin was allocated half of the beneficial consumptive use based on the limited (about 20 years of streamflow records) hydrologic data available at the time. This resulted in each basin being allocated an average of 7.5 MAF per year (million acre-feet per year) over any ten-year period with an additional 1.5 MAF per year for Mexico. As more streamflow records became available over time, the 16.5 MAF flow looks to be about 2 MAF per year more than it should have been. This meeting, which lasted from November 9-24, resulted in the Colorado River Compact, signed by representatives of all seven states. Later, when the Compact, was to be voted on by Congress as it had to be to beome binding, Arizona reneged on their earlier endorsement. In 1928, Congress changed the law, allowing the Compact to go into place with only six of the seven states endorsements. In 1944, Arizona finally signed onto the agreement and the Compact has been the basis for the resolution of all disputes since the original Compact was put into place in 1922. Below is a map of the Colorado River watershed showing the Upper and Lower basin and a chart showing the allocation for each basin and each state. 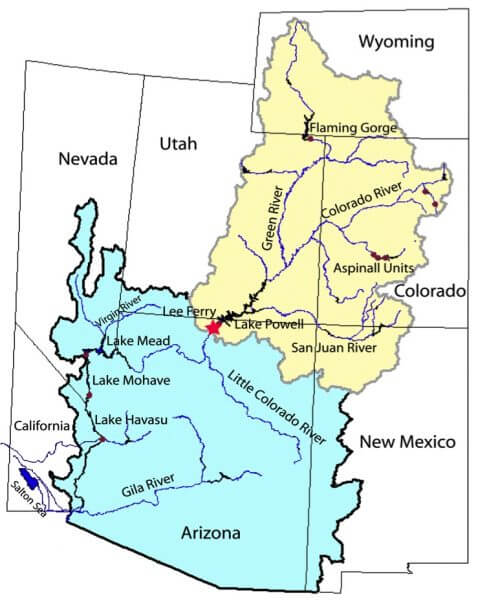 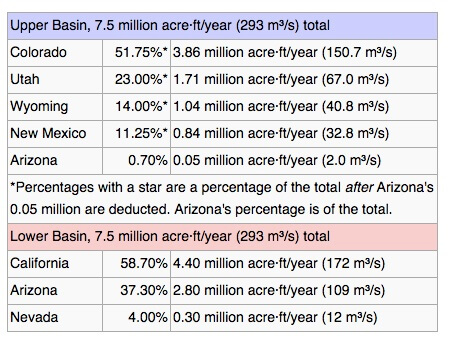 The Compact allowed the Boulder Canyon Project, which resulted in Hoover Dam and the All-American Canal, to proceed as well as all subsequent improvements including the Central Arizona Project.

There is a coda to this story. John Doyle Lee, convicted for his role in the murder of 100 or more people at the Mountain Meadows Massacre has as direct descendants, several well-known political families – including the Udall family (Stewart & Mo Democrats of Arizona, Tom Democrat of New Mexico & Mark Democrat of Colorado), the Lee family (father Rex & son Mike Republicans of Utah) and Gordon Smith Republican of Oregon. Here is a chart of the John Doyle Lee family tree. I just thought this was interesting. Still, I do have comments about this that relates to the current passing scene. And that’s this. Fortunately, in this country we do not abide by the concept of corruption of blood. It appears that John Doyle Lee committed evil at Mountain Meadows in September 1857. However, his sins have not and should restrict the rights of any of his extended family. It’s too bad that the neo-racists espousing Critical Race Theory, the 1619 Project and the like are unable to learn this simple lesson.