Modern newspaper comics are not very good. The demographics of print skew grey, so papers run legacy strips that started long ago – during the FDR era, in the case of Blondie, or Ike, in the case of Peanuts. Now and then a venerable strip is taken over by someone who yanks it into the 21st century; Mark Trail has new life, as does Nancy, revived with a slightly surreal aspect. Dick Tracy now has a self-conscious retro vibe.

But. Garfield plows the same furrow it has worked since the Carter years. Hi and Lois is frozen in post-war suburbia. Sometimes you see a single-panel comic added in the 90s when features editors were looking to shake things up with a Far Side-style comic whose “offbeat” tone might fit with the free-weeklies.

If newspaper comics seem rote today, well, thus it was always so. It’s always been a mix of sharp and plain, corny and witty. Strips have always hung on for decades past their expiration point, dragging the conventions of their era into foreign lands. Harold Teen, an account of Jazz Age flaming youth, ended during the Korean War. Maggie and Jiggs – aka Bringing up Father – started in the Wilson administration, and ended in the year 200.  Major Hoople – aka Our Boarding House –  started in the Harding era, and was still playing the same tropes in the days of Reagan.

I grew up reading Gasoline Alley out of habit, unaware that Frank King had turned a standard flivver-humor strip into something quite touching, with Sunday forays into design that treated the Sunday page as a single glorious canvas. It was just a standard feature by the time I came along. I had no idea how revolutionary Peanuts was at the start. I suppose we all accepted the comics in the paper at face value, noted the differing styles, and thought little about their history, the different eras they represented. We assumed they would always be there, every day, because why wouldn’t they?

It seemed impossible that Little Orphan Annie or Dick Tracy would stop. Why would they stop?

In my youthful adult years, there was the trifecta of quality: Doonesbury, Calvin and Hobbes, and Bloom County. The first was your daily reminder of the superiority of your political opinions. The second was a brilliant, if misanthropic, interrogation of human nature. The third was a loud, smart, highly verbal, slightly messy assemblage of personalities we all recognized. We all wanted to be as good as Opus, and knew we were as slack as Steve Dallas. Doonesbury still exists as a Sunday feature for NPR-listening Boomers, with all of its pieties and smugness embedded in amber. Calvin and Bloom County are long gone, their creators yee-hawing into the sunset before they soured on the creations they loved.

Berke Breathed, the creator of Bloom County, has been turning out new work. There’s no fanfare, no newspaper stories about its return. He just slipped the new stuff out at irregular intervals: here you go. It hasn’t changed at all, stylistically, although it’s aware of the passage of time. It’s a delight to see.

I wouldn’t bring this up at all, except for this: 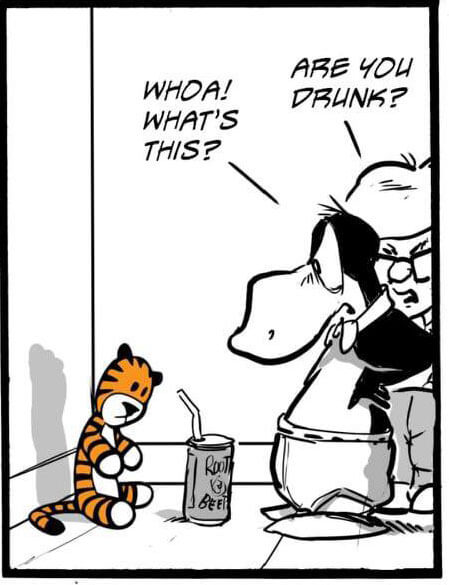 Opus finds Hobbes, and vows to reunite him with Calvin.

It’s a damned sweet thing. It’s all on the Twitter feed. Start here, and scroll up.