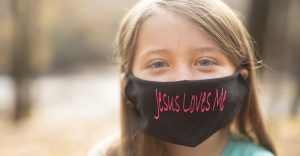 When children are treated badly, discriminated against, or attacked by the culture, I am protective and outspoken. And when the perpetrators are part of the school system, their actions are even more egregious. These offenders were prepared in this story to conjure up rules, violate the first and second amendments, and harm children in the process. And they needed to be called out for their actions.

Perhaps you haven’t heard the story about Lydia Booth and her mother, Jennifer, who are devout Christians and were targeted for how they were practicing their beliefs. (The story can also be heard in an interview here.)

This situation took place during a time when students were required to wear masks in school during the pandemic. Lydia Booth, nine years old, was quite willing to comply, and told her mother she’d like to wear a special mask. In talking it over together, Jennifer suggested a mask that read, ‘Jesus Loves Me.’ Lydia was delighted at the idea and a family friend made the mask for her.

One day, however, one of her teachers suddenly insisted she had to remove the mask because students weren’t allowed to wear masks with words on them. (At the time she was called out for wearing the mask, Lydia had already been wearing it for two to three months.) After some research, Jennifer discovered there was no such policy, so she sent Lydia back to school with the mask. But the school principal called her:

The principal calls me and she’s like, ‘We’re going to have to have Lydia swap her mask out,’ Booth recounts, adding that the principal said it was against school policy ‘to have religious symbols or gestures on her mask. . .

So we literally go hand-in-hand through the handbook, she says like, ‘I know it’s in here somewhere.’ And she’s flipping through, and she gets to the dress code, which you would assume would be the policy. The only thing she can point me to is like the drug culture, profanity, obscenities.

And I was like, ‘I’m sorry, but Jesus isn’t in these categories, and you’re going to have to give me a solid policy. You can’t just decide you’re going to censor Lydia.’ So she was like, ‘Well, I’m going to get back with the district office, because I know it’s in there.’

The most bizarre part of this story is that later, the assistant superintendent confirmed that the policy was not in the guidebook but in the “restart plan” posted on the school website. This administrator underestimated Jennifer’s determination to confirm his statement:

I actually make my living in IT for a local hospital. And so we kind of think of things a little different. It’s really easy to get it, but people don’t think about it.
So I went and I looked at the metadata for the document that he had sent me. And what it tells you is, it tells you the application they used, they used PowerPoint 2016. His license was tied to his name, so it had his name on there. And then it showed the date and the time that he had modified it, which was 30 minutes before he called me.

So if you can imagine the devastation that you’re like, what kind of lengths would these people go to? In this situation, it’s insane to think.

Needless to say, Jennifer was very distressed at this deception, and contacted other school district officials, getting no support for her position. She felt she was being guided by G-d in her actions and would not give in to this attack on her faith. In sharing her upset when she attended her church, her pastor referred her to the local Southern Baptist Association; someone referred her to the Alliance Defending Freedom. A lawsuit is now pending, led by Tyson Langhofer. He was able to pressure the school to withdraw its demands, but they would not admit what they did was wrong. He believes that legally admitting to this fact is critical to the integrity of this case; otherwise, the school could imply that they had withdrawn under protest and that Lydia was wrong in her position.

This story moves and angers me on multiple levels. First, this anti-Christian bigotry is confirmed by the actions of the school administrators and teachers. Second, Jennifer Booth suggested in her interview that if children were raised in Christian homes and didn’t have parents who loved and defended their religion, would they have chosen to stay with their faith or leave it? (She believed many Christians became atheists as a result of this reticence.) Third, if people don’t like your actions or speech, they may feel free to censor you, and that violates the Constitution. Fourth, Jennifer wanted Lydia to know that her religion was worth the battle, even though it was a difficult one to fight.

Finally, Langhofer made the following statement about the case:

But it’s important, not because of the principle, because that principle’s there, but the issue that’s important is, we have to have individuals like Lydia that are willing to speak the truth, regardless of the consequences. And we have to have people like Jennifer, as a parent of Lydia, and says, ‘I’m going to stand for this. We’re going to protect this freedom. This freedom is vital to who we are as Americans, and we must protect it. And we must stand up for the rights, not only of what we believe, but for everybody to express those beliefs.’

Tyson Langhofer and Jennifer Booth speak for me. I hope they speak for you, too.