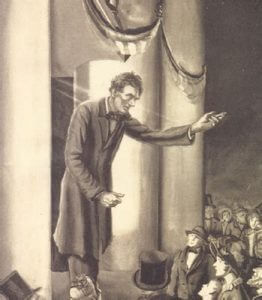 I hope today’s rather brief group writing post on “Truth” is informative on a topic I regard as significant. The reason for its significance surrounds the mounting accusations of racism involving our Republic, revisionist history with regard to the role of slavery, and the need to temper certain accusations with truth.

We are told almost on a daily basis, even by our leaders, that the United States is systemically racist. We are told that our founding was a product of slavery, as was the Second Amendment. We are told that some of our most revered persons bear the stain of slavery. In addition to the founding fathers, even Abraham Lincoln—in my view, our greatest President—has been subjected to scrutiny.

It is true that, until his address at Peoria, IL, on October 16, 1854, Lincoln had not focused on the issue of slavery. But, in 1854, the Kansas-Nebraska Act drew his scrutiny. The law permitted settlers to determine whether slavery would be permitted in their region, and Lincoln saw it as a de facto repeal of the Missouri Compromise, which outlawed slavery above the 36°30′ parallel.

So, at Peoria, several years before the Civil War and 165 years from today, Lincoln took on slavery.

I hate it because of the monstrous injustice of slavery itself.

So said a man with his political future on the line in his rivalry with Stephen A. Douglas. This is an obvious “truth,” but at odds with today’s narrative of a country born and raised on systemic racism.

I hate it because it deprives our republican example of its just influence in the world — enables the enemies of free institutions, with plausibility, to taunt us as hypocrites — causes the real friends of freedom to doubt our sincerity, and especially because it forces so many really good men amongst ourselves into an open war with the very fundamental principles of civil liberty — criticising [sic] the Declaration of Independence, and insisting that there is no right principle of action but self-interest.

Here Lincoln presciently understands that our country may be a role model for the world in the eradication of slavery. This is 1854.

My intent here is not to get into the standard “we’ve done some bad things but are making progress” discussion. My intent is to show that outright condemnation of the institution of slavery started a very long time ago. We should keep in mind the efforts of the abolitionists even before this, but here the focus is on a President who deserves to be revered for his words and deeds. That is the truth.