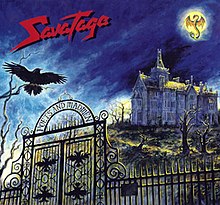 And Jesus please tell me if you can recall
Just where you were when this sparrow did fall.

I doubt whether more than one or two (if that) members of Savatage/Trans-Siberian Orchestra are orthodox Christians.  Still, I think “The Rumor” by Savatage is a better Christian song than some worship songs.

Savatage is the more heavily metal precursor to Trans-Siberian Orchestra.  TSO is the reason we used to hear that lovely “Carol of the Bells” on electric guitar at Christmastime, although the same song started off on a Savatage album.

The music of Savatage and TSO normally deals with questions about G-d and the meaning of life.  The question above uses the sparrow as a metaphor, drawn from the Gospel of Matthew, for every instance of seemingly pointless suffering.  Right before asking that, the singer asks Jesus why some particular very sad things are still happening.

And yet even though the singer wonders “Could you have died in vain?,” he has heard the rumor that “Your hands they still bleed.”  And at the end of the song, the singer observes that Jesus has more faith than we do, and he reflects that maybe that’s the way it’s supposed to be.

I think the song leaves us with that question, not the answer.  I could suggest a safe answer: Despite all the suffering, Jesus still trusts in God the Father and in the Scriptures that prophesy his death AND his resurrection.  Or we could go with the parallel sense of the New Testament word PISTIS/FAITH–Jesus has faithFULNESS, no matter the suffering. And of course, he has more of that than we do!

I think I’ve started reading Savatage the way Augustine reads the Psalms.  (I suppose there are weirder and worse things that can happen to a person.)

Anyway, here are the lyrics to “The Rumor” by Savatage.  Here’s a URL to a YouTube version of the song, and here’s another in case one of the links doesn’t work.