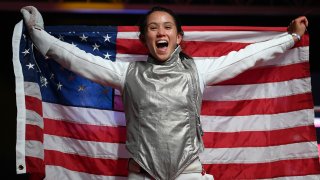 As the sporting world navigates any number of contentious issues, there are athletes that labor in obscurity. They are not as well known as athletes in other sports, but they work just as hard to succeed.

She is one of 11 current, and former Notre Dame fencers that are competing in the Tokyo Olympics. Lee graduated from Notre Dame in 2017. She is currently a student at the University of Kentucky medical school.