I’ll keep this brief: Today provided some convenient material for demonstrating just how to assess your play calling strategy from the line of scrimmage in today’s ultra politicized world.

The first comes from the propaganda spread at the top of the morning Yahoo Finance page. Aside from the asinine, fill-in-the-blank statement on early market activity, the other headlines almost always contain a tell and/or planted language to guide the browsing idiots. (Hint: Don’t ever read the articles, the headlines are brain numbing enough.) Earlier this year there were several moronic stories about how there is no downside to student debt forgiveness. Today we were greeted with a sure sign that our non-beltway special teams are undoubtedly doing something right: 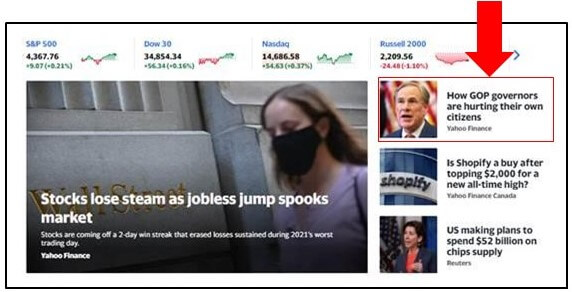 Well, at least two or three are pulling a large part of the load. More need to join in…and soon.

On the other side of the coin, there are times when you break the huddle and, before you get to the line, you notice that one of your own players is lining up with the other team:

So she wasn’t just saying that she’s agreeing with Pelosi, she’s not denying she might have been behind the suggestion. …

…she completely a minion of Pelosi, which she’s not hiding it at this point… Anyone that ever had any sympathy for this person should take a look at what she’s become now and learn a lesson. She needs to be removed from any committees she’s on and she needs to get primaried into next week. Having Cheney on the Committee doesn’t make it bipartisan. It makes it fully craven people serving the Democratic cause.

I would say that even stronger action is required for this pathetic turncoat…she must not be a part of any future huddle for Team R:

Republicans have one move left to make – remove Cheney from the GOP caucus.

This foolishness has gone on long enough. It was one thing to obsess over on January 6th. It’s another to lock arms with Nancy Pelosi, endorsing her ridiculously staffed committee, in order to backstab Republicans who are being denied a seat at the table. …

If nothing else, removing one turncoat now may help flush some of the others…YES, THERE WILL BE OTHERS…out into the open sooner rather than later. The time is ripe for some housecleaning before 2022:

Even more than the Trump presidency, the Biden presidency has revealed whose loyalty to the establishment exceeds all other loyalties.

Be warned: Loyalties to the establishment are stronger and more widespread than most care to imagine. [These people] were bought and paid for long ago…and, in the right situations, it shows very plainly on their faces:

"I agree with what the Speaker has done," says Rep. @Liz_Cheney on Speaker Pelosi's decision to not seat Reps. @Jim_Jordan and @RepJimBanks on the Jan 6 Select Committee pic.twitter.com/M25HqtNeAc