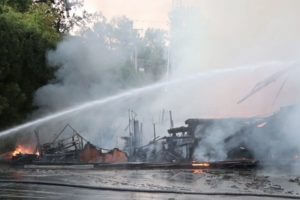 The Coptic Orthodox Church wasn’t established in Canada until the 1960s when mostly Egyptian Christians fled persecution in their homeland. The Copts suffered church burnings back home only to find it again in North America. Their faith broke from the Pope 1,600 years ago. Nevertheless, Canadian leftists shrugged off the attack and made excuses for the Klan-style church burnings.

After the first arsons, Executive Director of the British Columbia Civil Liberties Association Harsha Walia tweeted “burn it all down.” She was forced to resign last weekend. Justin Trudeau’s former top advisor, Gerald Butts, defended Walia, tweeting that the burning of churches may not be “cool,” but is certainly “understandable.”

Prime Minister Justin Trudeau didn’t comment until reporters finally asked him about the arson spree in early July. “It is unacceptable and wrong that acts of vandalism and arson are being seen across the country, including against Catholic churches,” Trudeau said. But then added, “The anger … is real. People have gone decades and even generations living with intergenerational trauma, with outcomes and institutional racism that has created extreme difficulties for Indigenous peoples across this country that are also the legacy of residential schools.”

Unlike the Liberal government, First Nations leaders rushed to denounce the crimes. “To burn things is not our way,” said Perry Bellegarde, National Chief of the Assembly of First Nations. “Our way is to build relationships and come together.”

Much of the arson appears linked to white progressives rather than indigenous people, unsurprisingly. Last week, a heavyset white woman was caught on camera attempting to set St. George Coptic Orthodox Church ablaze. Police are now seeking to identify her.

“Our church was more than a building … it was a place we built community, where we shared meals, where we married our youth, christened our babies, and welcomed newcomers to the faith,” Bishop Mina said of the attack in his diocese.

“We are in shock and struggling to cope in the emotional wake of this incident. We are grateful to all of those who have reached out expressing their sympathies, prayers, and offers of support as we determine our next steps as a community.”

Bishop Mina has pledged to rebuild the St. George church. You can support his efforts here.