Last year, we were told what in our society counts as “essential” and what doesn’t. Home Depot, liquor stores, Costco… essential. Small businesses, restaurants, gyms… not essential. It’s a terrifying thing watching the government decide if you’re important enough to society to stay open and operational. But there’s another awful aspect of the governmental decision-making process: Sometimes they decide something isn’t essential, and we realize later on just how wrong they were. That seems to have been the situation with a family highlighted by a parenting Instagram influencer this week. 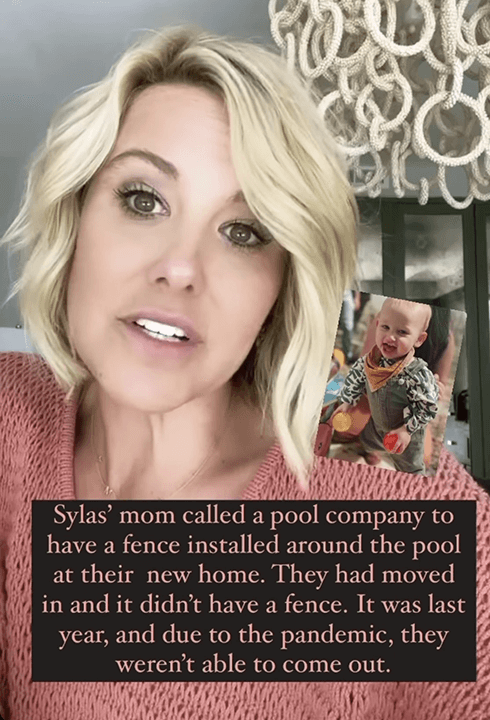 I’ve written about the woman behind “Taking Cara Babies” before; she’s a social media baby sleep expert who was semi-canceled when it was discovered that she donated to President Trump’s campaign. She refused to be canceled, and this week, she’s highlighting one of the biggest dangers to babies, toddlers, and children: drowning. On Instagram last night, she shared the story of a toddler who tragically lost his life. You can see a snippet of the story from a screenshot of her Instagram stories.

Let’s be clear: It wasn’t “due to the pandemic” they weren’t able to come out. They were prevented from coming out because of our governmental response to the pandemic. A senseless response that shut down our entire society for the entire spring and summer in many parts of America. And in the sections of the country that were the most locked down? We saw the most death from the virus.

We hear a lot about the death toll from COVID, but these are the stories that will go uncounted and unacknowledged. Defenders of the lockdowns say “Yes, but over half a million people died!” They say that as if closing down a fencing company in any way could have saved one of the lives lost to COVID or prevented anyone else from contracting the virus. No, closing down most of these parts of our society did nothing to prevent the spread of COVID, and did a great deal of collateral damage instead. Stories like Sylas’s need to be told; we need to recognize the many preventable deaths and all of the misery caused by our decision to deem some businesses essential while shuttering countless others.

We tried to shut down our society (at first we were told it was just for two weeks, lol, those were the days) but are learning that life has no pause button. And for families like Sylas’s, there’s no do-over button either.