My Mom and Dad met when they were reporters for the El Paso Times.  After they married, my father became a correspondent* for the Associated Press in New Mexico.  My mother worked as a police reporter, stringer, and photographer until my father became AP bureau chief.

She still reads two physical newspapers every day.  During a visit last week, she handed me this clipping, asking “How did that happen?” 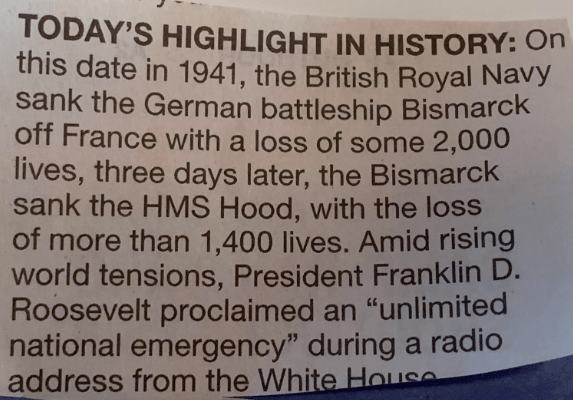 I glanced at the clipping and started to tell her what I knew about the history of the Bismarck, the battle of Denmark Strait, and the final sinking of the German ship.   She stopped me and said, “No, I wanted to know how it sank another ship three days after it had been sunk itself.”  I looked more closely at the clipping and saw the mistake.  “Oh,” I said, “they should have written ‘earlier’ instead of ‘later.'”

Even though she had not been a newspaperman since the 1970’s, she was still able to spot this one mistake.  I guess you never lose your skills.**

Surprisingly, even though she had lived through those times, she had no knowledge of the events described in the clipping.  I won’t fault her for that.  When the Bismarck was sunk, she was a young girl in a small town in rural Texas.  She didn’t turn twelve until December 7th of that year.

* My father hated the word ‘journalist,’ corrected anyone who called him that, and refused to hire anyone with a journalism degree.  His degree was in history.***

*** I’ll bet he knew about the sinking of the Bismarck.