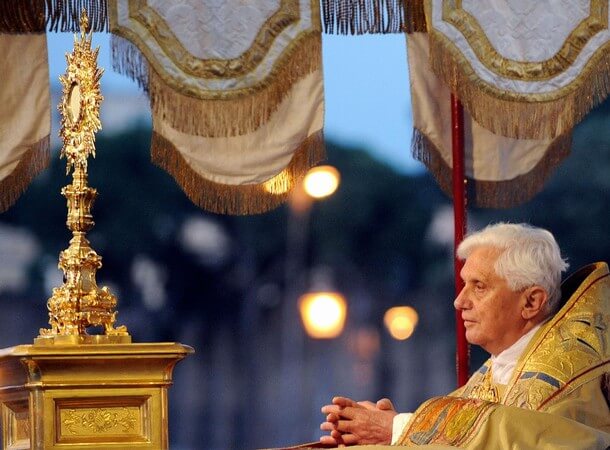 In addition to being D-Day, today marks the Solemnity of the Most Holy Body & Blood of Christ.

Spooky, right? Today Catholics paid more attention than usual to one of the great supernatural features of the Catholic faith; the actual transformation of bread into flesh, and wine into blood.

If you want to get kids interested in the Church (I tell anyone who will listen), sieze on stuff like this and make the confirmation ceremony look more like a Marilyn Manson concert than the fluffy joy fest it has become today. Focus on rivers of blood, secret language (Latin), 3D Gothic images, Gregorian chants, etc. And dress those Knights of Columbus like Roman soldiers for effect and get them out of those Captain Crunch suits. This will get the kids interested. The last thing they want is 40 year old church ladies trying to make things “hip” with grooveless interpretations of mid-tempo tunes left over from the 1970s flowery Charismatic movement. We all know there hasn’t been a decent song written for Catholics in a thousand years so let’s stick with the hits. Your kid likes the Beatles right? He’s gonna go ape for Panis Angelicus. Give it a chance. Your kid likes the 1980s? How about the actual 80s? when the Church was still smarting from its first Pope being martyred on an upside down cross. While we’re at it, let’s take the upside down cross appeal away from the metal heads and own it. And don’t get me started on the Pope’s red shoes. If you’re kid’s watching too much Glee, have him take a look at those babies.