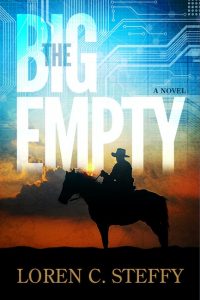 Texas ranching has been under economic siege almost since it began. It has always offered an opportunity to make a small fortune, nowadays by starting with a large one. Yet for all its flaws, ranching is addictive. So is abandoning ranching.

“The Big Empty,” a novel by Loren Steffy, steals one of the classic tropes of Texas letters: modern technology displacing ranching. The oil industry is the traditional disrupter. Set at the dawn of the 21st century, Steffy makes high tech, computers, and the internet ranching’s competitor. He adds a spin. The ranchers are rooting for high tech to win.

Conquistador is a dying West Texas cattle town. While not at the end of the world, on the flat West Texas plains it might as well be. Ranching is fading as a business. Conquistador’s residents are desperately seeking new industry to draw jobs there. They even tried getting the state to build a prison, just for the jobs, only to be turned down. Conquistador is too remote even for prisons.

Their last big hope is the AzTech chip plant. The high-tech company is investing three billion dollars to put a semiconductor wafer factory in Conquistador. It’s building the plant and moving skilled tech workers from Silicon Valley to oversee it. The newcomers, whom the locals soon dub homies, seek to import Silicon Valley to arid West Texas. This includes a gated community with water-sucking amenities: a pond, fountains, and lawns.

This clash of cultures soon threatens to erupt into a game of cowboys and homies. Both sides have something to learn from the other. The locals, needing jobs, are willing to learn. The college-degreed homies are not. They see the locals as barbaric and uneducated, with nothing to offer.

Steffy frames the conflict in interactions between Blaine Witherspoon, running the plant, and Trace Malloy, a superintendent at the largest local ranch. The novel opens with the two literally on a collision course. It continues throughout the book.

Both men want the plant to succeed, yet end up sparring. Witherspoon can’t understand that local values differ from his due to their painfully gained experience. This triggers Malloy’s truculence at being ignored as ignorant. The two reach an accommodation in time to resolve a crisis threatening ranch and plant.

“The Big Empty” captures a moment when Big Tech seemingly promised everything. By turns funny and painful, Steffy’s story builds like an accelerating freight train, reaching a fast-paced climax.